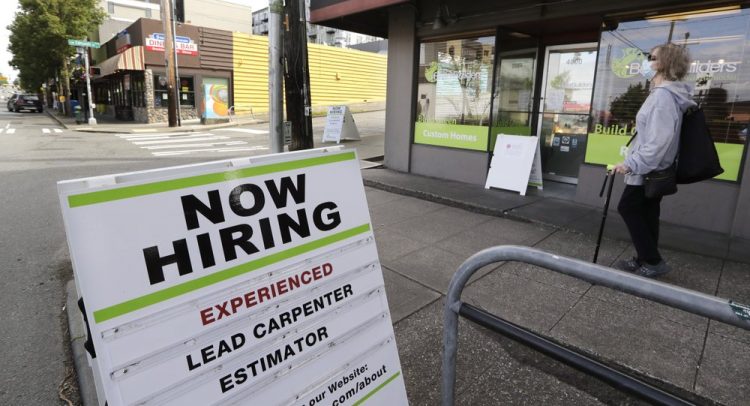 WASHINGTON (AP) — About 1.5 million laid-off workers applied for U.S. unemployment benefits last week, evidence that many Americans are still losing their jobs even as the economy appears to be slowly recovering with more businesses partially reopening.

The latest figure from the Labor Department marked the 10th straight weekly decline in applications for jobless aid since they peaked in mid-March when the coronavirus hit hard. Still, the pace of layoffs remains historically high.

The total number of people who are receiving unemployment aid fell slightly, a sign that some people who were laid off when restaurants, retail chains and small businesses suddenly shut down have been recalled to work.

The figures are “consistent with a labor market that has begun what will be a slow and difficult healing process,” said Nancy Vanden Houten, an economist at Oxford Economics. “Still, initial jobless claims remain at levels that at the start of the year might have seemed unthinkable.”

Last week’s jobs report showed that employers added 2.5 million jobs in May, an unexpected increase that suggested that the job market has bottomed out.

But the recovery has begun slowly. Though the unemployment rate unexpectedly declined from 14.7%, it is still a high 13.3%. And even with the May hiring gain, just one in nine jobs that were lost in March and April have returned. Nearly 21 million people are officially classified as unemployed.

Even those figures don’t capture the full scope of the damage to the job market. Including people the government said had been erroneously categorized as employed in the May jobs report and those who lost jobs but didn’t look for new ones, 32.5 million people are out of work, economists estimate. That would have raised May’s unemployment rate to 19.7%.

Thursday’s report also shows that an additional 706,000 people applied for jobless benefits last week under a new program for self-employed and gig workers that made them eligible for aid for the first time. These figures aren’t adjusted for seasonal variations, so the government doesn’t include them in the official count.

The weekly reports on applications for unemployment benefits track layoffs. But they don’t directly account for hiring, which can offset layoffs. The surprise job gain in May suggests that some employers are recalling laid-off workers.

Private real-time data also points to steady, if modest, rehiring. Data from Kronos, whose software tracks workers’ hours, shows that the number of shifts worked has recovered steadily since bottoming in mid-April. Shifts worked have risen 25% since then, recovering nearly half the work that was lost to the pandemic-induced business shutdowns.

“The growth in shifts worked … indicates that furloughed employees are being called back to work as each state opens up,” said Dave Gilbertson, a Kronos executive.

Twenty-four states reported a rise in applications for jobless aid last week, up from just four the week before, though the state data isn’t adjusted for seasonal trends so it can be volatile. California, New York and Massachusetts reported sharp increases. Florida, Georgia and Texas, some of the earliest states to reopen their economies, reported large declines.

In February, the economy fell into a deep recession, according to the National Bureau of Economic Research, the association of economists that is the official arbiter of recessions. The Federal Reserve estimated Wednesday that the economy will shrink 6.5% this year. That would be, by far, the deepest annual contraction on records dating to World War II.

Even as restaurants, bars and gyms reopen, they are doing so at lower capacity. And consumer spending on such services remains far below what it was before the viral outbreak.

Unemployment benefits are providing significant support for jobless Americans, with total payments having reached $94 billion in May — six times the previous record set in 2010 just after the previous recession. This time, the benefits include an additional $600 a week from the federal government.

But that extra benefit is set to end July 31, and the Trump administration opposes extending it. Its opposition has set up a possible clash with House Democrats, who have approved legislation to extend the $600-a-week in federal benefits for an additional six months.

Republicans in Congress argue that the extra $600, which comes on top of state benefits that average about $375 nationwide, means many of the unemployed are receiving more money from jobless benefits than they earned at their old jobs. Republicans argue that this discourages people from returning to work.

Studies suggest that roughly two-thirds of the recipients are receiving total unemployment aid that exceeds their previous paychecks. But many workers are also wary about returning to their old jobs for fear of contracting the virus. And recipients who receive aid can lose their benefits if they turn down job offers.

Karin Jensen of Concord, California, has been out of work since being laid off from a managerial position with Men’s Wearhouse in late March. Jensen, 27, says she plans to return to her job whenever she is called back and is grateful that her company is continuing employee health care in the meantime.

Jensen acknowledged that receiving the extra $600 has made her less eager to return to work because she is among recipients whose total benefits exceed their former income. But she’s also worried about returning to retail work.

“I’d be in close contact with people,” Jensen said. “We have to measure customers, actually touch them. There’s no way we could do any minimum social distancing if we were to return to business as usual. I’m more than a little uneasy about it.”

Photo: In this photo taken Thursday, June 4, 2020, a pedestrian wearing a mask walks past reader board advertising a job opening for a remodeling company, in Seattle. The U.S. unemployment rate fell to 13.3% in May, and 2.5 million jobs were added — a surprisingly positive reading in the midst of a recession that has paralyzed the economy and depressed the job market in the wake of the viral pandemic. (AP Photo/Elaine Thompson)

Earth Today | COVID-19: An Opportunity To ‘Build Back Better’ In The Caribbean

It's time we South Asians understood that colourism is racism