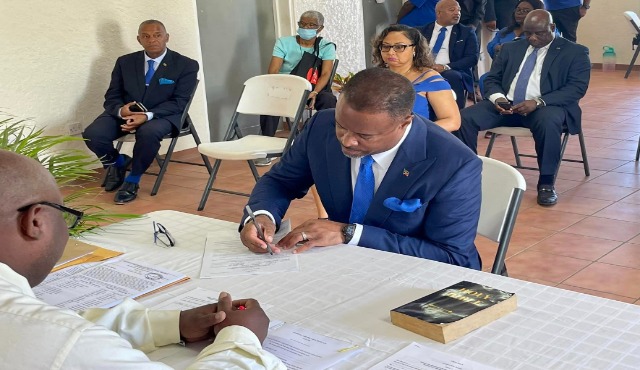 Basseterre, Monday, 5th December, 2022, (MyVue News.com) –The contest to determine who will form the next Island Administration in Nevis will see a straight political fight between the now ruling Concerned Citizens Movement, (CCM), and the opposition Nevis Reformation Party, (NRP).

Both parties nominated five candidates each on Monday, 5th December, to contest the five electoral districts across the 36 square mile island.

The NRP, which is led by Dr. Janice Daniel-Hodge, will field four female candidates and one male, while the CCM, led by Premier Mark Brantley, is presenting four males and one female.

Four of the five candidates for the NRP will be making their political debut in the local elections. These will be the leader, Dr. Daniel-Hodge, Dr. Patricia Bartlette, Jaedee Caines, and Rohan Isles.

The fifth NRP contender, Cleone Stapleton-Simmonds faced her first local election on 5th March, 2020, when a by-election was held following the resignation and retirement of former Premier Joseph Parry in 2020. He, however, headed the NRP from 1992 to 2018.

Across the aisle of the political spectrum, only one newcomer will be facing the poll for the CCM. She is accountant Latoya Jones, who is currently an advisor in the local government and a senator and Deputy Speaker in the Federal Parliament of St. Kitts & Nevis.

Jones will face off against Stapleton-Simmonds, a lawyer by profession, and who has held the seat for almost three years.

They will both contest the constituency of St. Thomas, which has always been represented in the past by the NRP and was their stronghold throughout the decades.

However, the CCM claims that it has mounted a very strong campaign with Jones, and is making the case that the once garrison seat could very well be a highly competitive district on Monday, 12th December, when Nevisians go to the polls.

There is no doubt that the Jones campaign has excited the electorate and attracted much attention, with many on the island predicting a possible upset victory, but Stapleton-Simmonds has countered those arguments, suggesting that her seat is solid and will be defended “at all cost”. She also promised that she will be “militant” in that defense.

However, if one is to be guided by the numbers from the 2020 and 2022 Federal elections, in which the St. Thomas seat is tagged to St. James’ to make one federal constituency, it would indicate that the CCM has in fact increased the level of support they enjoy in the St. Thomas portion of the district. Voter turnout would perhaps determine the outcome.

Not too far away, Premier Brantley will be facing his cousin Dr. Barlette in the St. John’s constituency, while his Deputy Alexis Jeffers will seek to defend his turf against the challenge from NRP leader, Dr. Daniel-Hodge, in St. James.

This district has been loyal to the CCM for over 30 years, but it has been specifically targeted in recent years once it was known that the NRP leader was entering the race.

The CCM stronghold of Gingerland, St. George, will be a direct contest between incumbent Eric Evelyn, against NRP’s Rohan Isles.

Perhaps one of the most competitive districts in Nevis has been St. Paul’s seat, which is located in the capital of the island, Charlestown. Voters in this district will have to select from the options of the incumbent, CCM’s Spencer Brand, and NRP’s Jaedee Caines.

This means that there will be 12 candidates overall seeking the support of the electorate on the island.

Mbappé is bringing soccer to a new dimension at World Cup

Neymar in Brazil’s lineup against South Korea at World Cup