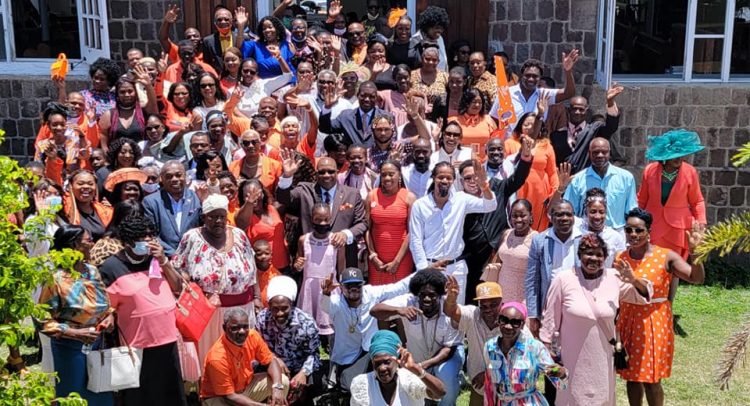 Peoples’ Labour Party (PLP) attended the Zion Moravian Church on Victoria Road, Basseterre on Sunday 15th May, 2022. The Rev. Onita Samuel-Warner who officiated the service, welcomed the Prime Minister Dr. The Honourable Timothy Sylvester Harris. As the National Political Party Leader of the PLP, he led a large contingent of members, supporters and well wishers to the service. Among the dignitaries were Deputy National Political Party Leader of the PLP, Hon. Akilah Byron-Nisbett, His Excellency Ambassador Ian Patches Liburd and His Excellency Ambassador Sydney Osborne.

The Hon. Akilah Byron-Nisbett who brought greetings on behalf of our Party, gave a spirit filled and inspiring exhortation. She reminded the congregation that she was baptised and confirmed in the Zion Moravian Church and that she is a proud member of the Church. She encouraged the congregation that no matter the circumstances, we must always trust in GOD’s favour and to remain faithful to GOD in prayer. She also stated that we must always have respect and pray for the leader who GOD has appointed and to remember our government in prayer as well.

The congregation was then treated with a gospel rendition of “The Goodness Of GOD Is Running After Me” from His Excellency Ian Patches Liburd. He is a faithful member of the Zion Moravian Church as well.

The message delivered by Rev. Samuel-Warner on forgiveness, allowing GOD to do something new in your life and not to judge one another. She encouraged all to move away from traditional norms and to see that GOD wants to use a new way to benefit his people.

The PLP continues to rely on GOD’s guidance and protection as we continue to put GOD and the People First.