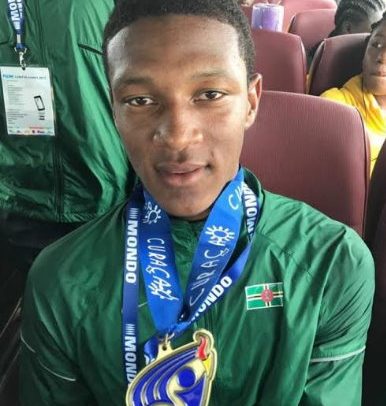 The Marigot Development Corporation (MDC), has secured a sports scholarship for Keyon Burton to attend college in the United States, under the Sports component of its “Study in the US Program”.

Burton is now a student-athlete at the Iowa Western Community College (IWCC). He has decided to major in Business Administration.

The IWCC head coach is very excited to have Burton join his team. He sees him as a very good prospect and is anticipating success for him in the upcoming NJCAA Outdoor Competition.

Burton is the gold medalist of the 2017 CARIFTA Games in the javelin event and joins Zellie Charles and Chelsey Linton in the MDC program.

The Sports component of the “Study in the US Program” targets mainly performing student-athletes of the WESMAR Rangers Athletic Club, with the ability to leverage their talents into US college opportunities.

Michael Pascal, Coordinator of MDC, said he is very pleased that the MDC was able to secure an athletic scholarship for a third youth of the community. He recognizes all the persons in Burton’s life and MDC’s extended network who have made this possible.

At the top of his list are Burton’s mother, Claire Burton andGodwin Dorsette, coach of the WesMar Rangers, without whom Burton’s achievements as a student-athlete would not be possible.

Special thanks go to MDC’s network of supporters, who provided gear and other supplies for Keyon’s transition into the NJCAA system. Mention is made of the MCCU, Grace Foundation, Brian Linton, Jeff Pascal, Byron Winston, Arthur Riley, Maysill Pascal, Damon Jno. Baptiste and Tarik Pascal.

The MDC looks forward to stellar performances both on and off the field from Burton.