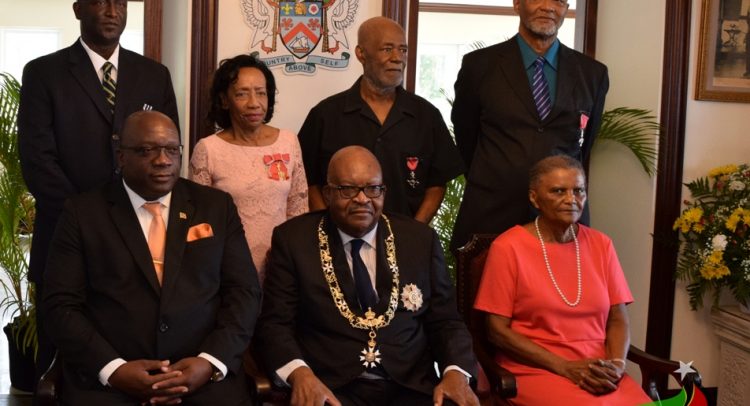 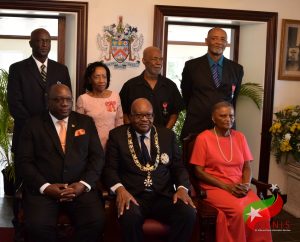 Basseterre, St. Kitts, June 20, 2018 (SKNIS): Four citizens of St. Kitts and Nevis, who were announced on New Year’s Day as being on Her Majesty the Queen Elizabeth II New Year’s Honours List by Prime Minister Dr. the Honourable Timothy Harris for their contribution to nation building, were officially invested on Wednesday, June 20, at Government House.

Prime Minister Harris used the occasion to commend the awardees, adding that they are all “civically engaged citizens”.

“Today’s investiture is a culmination of all of your years of devoted service, outstanding commitment and leadership. Today has also been made possible by your family’s encouragement and understanding. Your families have been the winds beneath your wings,” said Dr. Harris, while noting that family is important as they “inspire us to contribute to our communities so that we can create a lasting legacy which they and future generations can be proud.”

Reflecting on the theme for this year’s anniversary of Independence: “Love, Service, Patriotism and Pride, Independence 35”, Prime Minister Harris noted that the honourees represent the esteemed principles expressed in the theme.

“Through their diligence, leadership and hard work, the New Year’s awardees have achieved great success and respectability. Importantly too, they have bequeathed the gifts to their families and to their fellow citizens who admire and emulate them,” said the prime minister.

Sir Tapley commended the awardees, noting that they are all well deserving of the honour. He especially recognized and placed on record his appreciation to Her Honour Mrs. Marjorie Morton, Deputy Governor General, for her presence.

“She has always been prepared to lend her support to the activities here at Government House and generally she is my representative in Nevis. I wish to commend her for the excellent job that she has done over the period of her service and to wish her well in all of her future endeavour,” stated the Governor General.