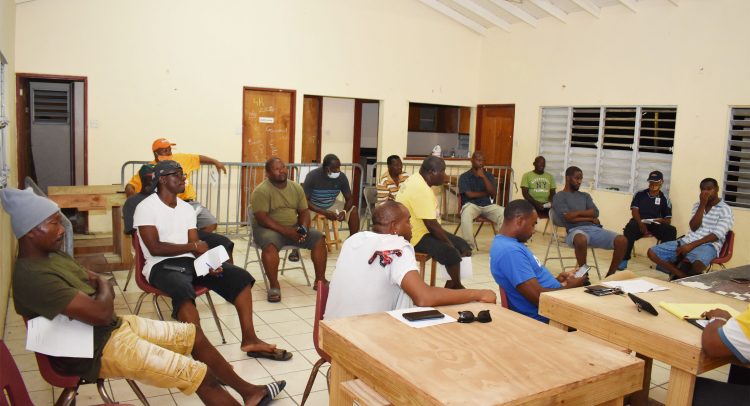 At a meeting held on Monday evening July 13 and attended by captains of teams taking part in the 25th edition of the country’s longest running domino league, Constituency Number Seven Dr the Hon Timothy Harris Domino League, it was agreed that matches will be held at three venues.

The meeting was held at the Lodge Community Centre in Lodge Project and was attended by twelve captains of the thirteen teams that have so far confirmed that they will be taking part in this year’s tournament. A fourteenth team which had indicated that it would take part is yet to confirm.

According to President of the Executive Committee and League Coordinator, Mr Calvin Farrell, the new format of playing at the three venues is a departure from the traditional home and away matches where teams played at their home venues. The teams will this year be allocated the venues where to play and face each other in round one, and then in round two.

The league starts on Tuesday July 28 and will be held under Covid-19 protocols. Secretary Ms Huggins added: “Again, we won’t stop stressing the point that facemasks are needed for the games and hand sanitisers at all venues.”

“We discussed the church service which will be held on Sunday July 26 from 9:00 am at the Estridge Moravian Church in Mansion – how much persons need to attend, and it was agreed that it will be attended by two persons per team, which will be the captain or his/her appointee and one player,” said Ms Huggins.

She explained that the church has requested that two persons from the domino fraternity do scripture readings, while the President will give remarks. She further noted that sponsor of the league Prime Minister Dr the Hon Timothy Harris, who calls the church his ‘home’ church, will be expected to deliver brief remarks at the church.

Vice President of the Executive Committee, Mr Simeon ‘Cuban’ Liburd, advised that after the church service, there will be six exhibition domino matches that will be played at the Lodge Community Centre in Lodge Project starting from 2:00 pm where six visiting teams will face six teams made up of players from the fourteen teams taking part in the 25th edition of Constituency Number Seven Dr the Hon Timothy Harris Domino League.

Main photo: Captains of domino teams present at the meeting held at the Lodge Community Centre on Monday July 13.