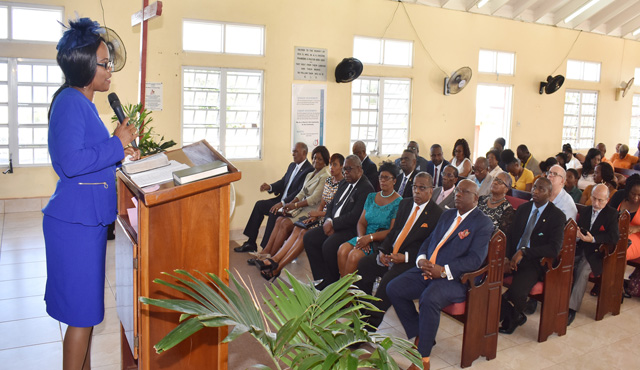 26 yrs as a parliamentarian: PM Harris thanks constituents

“Twenty six years ago, in 1993, I returned from Canada and offered myself to the people of Constituency Number Seven,” said Prime Minister Harris during a worship service held at the House of Deliverance New Testament Church of God, Main Street, in Tabernacle.

“The people of Constituency Seven gave me overwhelming support on the 29th of November 1993. Every election that I have contested since 1993, you have treated me better than I deserve and so I am very much delighted that so many of you have come out today to show solidarity and support.”

Activities held to mark the 26th anniversary of Dr Harris’ service to the people of St. Kitts and Nevis as a parliamentarian started with a church service on Saturday November 23 at the Seventh Day Adventist Church in Molineux, and culminated with the worship service at the Tabernacle church, which is his hometown church.

The message, which was delivered by Senior Pastor Mrs Octavia Charles-Warner, was based on the book of Numbers 13:30 and was captioned: ‘Giants are in the land but with the help of the Lord we are well able to overcome’.

“I want to say thanks to this church; thanks for the support; thanks to all of you who have journeyed far and near – Sandy Point, Basseterre – and a special thank you to my constituents who have been with me for so long,” said the Honourable Prime Minister. “I owe a debt of gratitude which I shall never be able to pay, except to keep in my heart that love for you, for your family, for your friends and to promise, while serving, I shall certainly give the best possible service I can for my constituents whom I love so very much, and to the country as a whole.”

Prime Minister Harris also paid special tribute to his political colleagues in the tripartite grouping, the Team Unity Family. The Team Unity of three political parties, which forms the Federal Government, is made up of his Peoples Labour Party (PLP), People’s Action Movement (PAM), and the Nevis-based Concern Citizens Movement (CCM).

Earlier on, a brother of the Prime Minister, Mr Hester Rawlins told the congregation as he paid tribute to their father and his brother (Prime Minister Harris) that 1st December is a special day for the extended family. Their father, Mr Godfrey Nisbett of blessed memories, would have been 102 years old, while their sister Ms Velma Nisbett, also of blessed memories, would have celebrated her 68th birthday.

“I wish to welcome all those who are here today, celebrating not only with Timothy but for me especially, to my father who was very special to me,” said Mr Hester Rawlins. “Those persons who are from the community of Tabernacle and everybody in Tabernacle know who my father was. He placed a very high value and discipline and dedication, thus there is no surprise in our teenage years four of the sons became police officers. It is because of the discipline that we had in our house.”

Mr Rawlins added: “My father was a God-fearing person, so I am not surprised that Timothy behaves in that kind of way (attending church services). As a matter of fact he (the father) told me he used to worship at this very church.”

Others included returning national and former judge of the OECS, Mr Tony Ross QC; Director of the St. Christopher and Nevis Social Security Board, Mr Antonio Maynard; and membership of the Peoples Labour Party (PLP), led by its National Chairman Mr Warren Thompson.