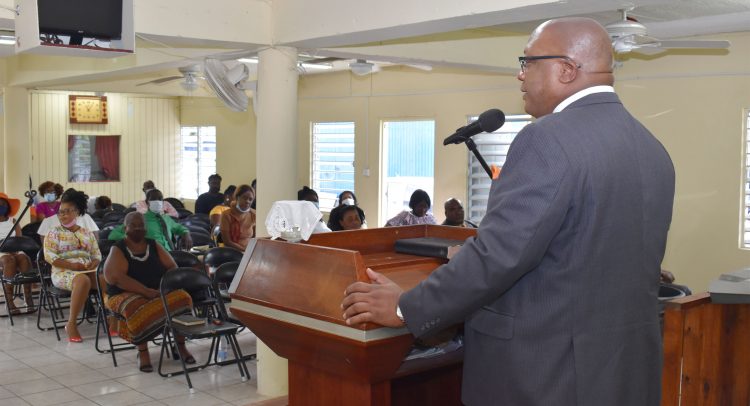 28 years in Parliament: PM Harris reflects on transformation in Constituency #7 and country

As he prepares to celebrate the 28th anniversary as a parliamentarian, he is reflecting and sharing with his constituents the transformation that has taken place under his watch in the constituency and the country on a whole, and is thanking them for their loyalty and trust in him.

“Thank you very much for your support through all the years,” said Dr Harris. “Through good times and bad times, the people of Constituency Number Seven have never let me down, and I will do and endeavour to do my very best always to assist you – to deliver for you, and by the Grace of God I shall continue to deliver, so thank you again for your support.”

Prime Minister Harris, who is also the National Political Leader of the Peoples Labour Party (PLP), one of the three political parties in the ruling Team Unity Administration, made the remarks on Sunday November 21 when he and members and supporters of the PLP worshipped at the Miracle Temple in Lodge Project.

“Thank you for your loyalty, and thank you for your trust in me,” continued the Honourable Prime Minister at the worship service which was conducted by Pastor John Bradley, who also delivered the sermon. “And over the last many years we have seen the constituency transform because I made it my business to deliver for you.”

Starting with the Lodge-Ottley’s area, Prime Minister Harris informed that there are several housing programmes, and that he would have delivered housing for somebody that they know, and the new Violet Petty Primary School. He pointed out that those are things they are to give God thanks because that is part of the promised stronger and safer future.

“We have seen for example in Upper Lodge Project two housing projects on either side as we continue to go further up in the hills, as we use available lands to deliver housing for all the people of the constituency,” stated Dr Harris. “We have seen, going down to the Grange Health Facility, the extension of our housing programme, and on the left-hand side you have seen one of the most modern community centres in the country (the new Lodge-Ottley’s Community Centre) being delivered for you the people of this constituency. So everywhere, there is evidence that I have been working for you the people.”

In Molineux he mentioned of further housing programmes, the building of a new Mary Charles Hospital and the bringing back of the ambulance service and the dental unit. He recalled that he at one time he met the former Premier of Nevis, Ambassador His Excellency Vance Amory, going to the facility for a dental appointment.

As for the neighbouring Mansion Village, the Prime Minister also talked of the new primary school built under his watch, and two housing projects. He advised that fifteen homes will be delivered between now and Christmas for the people of the Constituency.

“Tabernacle continues to expand,” said Dr Harris of his hometown. “We have brought there improvement in our security with a brand new Forensic Department. We built the best health centre in the country and in the Caribbean, right there in Tabernacle, and we named it after an outstanding nurse, Nurse Sylvia Garnette, who served as matron.”

Black Rocks, which is on one end of the vast constituency (Bellevue), has been developed from a small petite community, and has expanded with a housing programme. Government has created a brand-new tourism attraction at Black Rocks, where a lot of activities take place, to include a modern stage and it has bathroom facilities.

“When we look around, we see transformation of the constituency and indeed of the country,” pointed out the Prime Minister. “I am happy that under my watch that so much things have happened, particularly in public infrastructure. Ambassador Ian Liburd did a wonderful job, and was the most productive minister of Public Infrastructure.”

According to the Prime Minister, some of Ian Liburd’s work as the minister of Public Infrastructure include roads that have been resurfaced around the island of St. Kitts, the Basseterre Ferry Terminal, the East Basseterre and the West Basseterre Bus Terminals, and the brand-new Department of Public Works on the factory compound among many others.

“But not only in St. Kitts had we been working hard,” observed Dr Harris. “We have delivered services on the island of Nevis and we have worked well with that government so that today nearly $400 million have been provided to the people of Nevis, first a range of public sector initiatives and government initiatives. So, we have been good as we promised the people of Nevis, and we have done that without creating any challenges for the people of St. Kitts and Nevis, because by the grace of God we have been able to manage the finances of the country very well.”

He concluded: “We continue to deliver for you the people because Government is about people – government is about doing good for the largest possible number of persons. Everyone will not be satisfied, and everyone perhaps may not be rich, though we must bring the majority of the people along in the country.”

Official: More than 90% of fed workers got shots by deadline