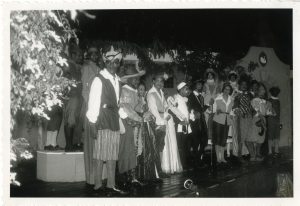 In August 1964, St. Kitts had its first Arts festival.  It was meant as a commemoration of the 400th anniversary of the birth of William Shakespeare.  Our image today  is the Curtain Call following the  performance of Twelfth Night at the Factory Social Centre. It comes to us as part of a photographic collection from SSMC and we are very grateful to Mr. Reginald George for keeping it safe till it was handed over to the National Archives.   Visible in the photograph are Leroy Nelson (Antonio), Lesley Woodley (Sir Toby), Phillippa Herbert (Maria), Colin Archibald (Sebastian), Joseph Manchester (Feste), Cromwell Bowry (Malvolio), Pam Wall (Viola), Paul Southwell (Duke Orsino), Neville Ikin (Sir Andrew).  The play was produced by Noel Vaz, the Drama Tutor of the Extra Mural Department, University of the West Indies.

At the opening ceremony J N France, then Minister of Social Services hoped that the event  would be an inspiration to the youths and a chance to show case “the wealth of talent that has largely remained undiscovered, unevaluated, undeveloped.”   The festival also included other short performances at the Education Centre, dance and various exhibits showcasing art, photography, crafts and flower arranging.  The Central Committee was made up of Paul Southwell (Chair), George Warren (Deputy Chair) William Herbert, Lloyd Matheson, William Dore, Aimee Dinzey, Joan Mallalieu and Lileth Kelisk.  It was in fact an event that required and had at its disposal the talents and energies of a large number of persons in the community.

Nestle sells Crunch, Nerds and other US brands to Ferrero for $2.8bn