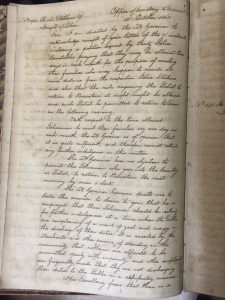 Some time before the 10th of October 1868, thirty Police Constables signed a petition which was submitted to the Inspector of Police.  He in turn forwarded it to the Lt Governor, who in the absence of the Governor,  was the head of the Government in St. Kitts at the time.  This petition and the accompanying letter have yet to be found.  We hope that they still exist in copy form in one of the volumes of Correspondence.

The second request was granted but they had to be back in town the following morning by 7.00am.  Sounds fairly easy today but in those days people walked or hitched rides on carts.  Both could be quite slow which meant that somebody caught out in St. Paul’s had to leave wherever he was very early in the morning.

The first request was rejected outright because the perception of the people at the time was that the constables lacked zeal for their work and that too many robberies were happening with impunity.  One has to note that the people complaining were merchants.  Without excusing robberies, one has to keep in mind the big social disparity of the time and the fact that people often had difficulties making ends meet.  There were few alternatives to plantation work and no minimum wage at the time.  Planters wanted the working population dependent on the meager wages that they paid so that they would show up regularly.

And then we have the constables! This letter suggests that more research about the history of the Police force needs to be done. Meanwhile we will take a brief look at the implications.

The Lt Governor considered the one day a month to visit family enough.  This raises the question, what kind of home life did they have, and where were they living?   It is obvious that the Inspector of Police understood the men’s request or he would have discouraged them from writing the petition.  The rebuke he received about discipline in the Force confirms this.

In the 19th century, police constables were often despised because of the role they played in keeping order.  They were often called in, under the Masters and Servants Act. to arrest tired workers who put down tools.  For these men to be deprived of a semblance of family life could not have made them better persons.