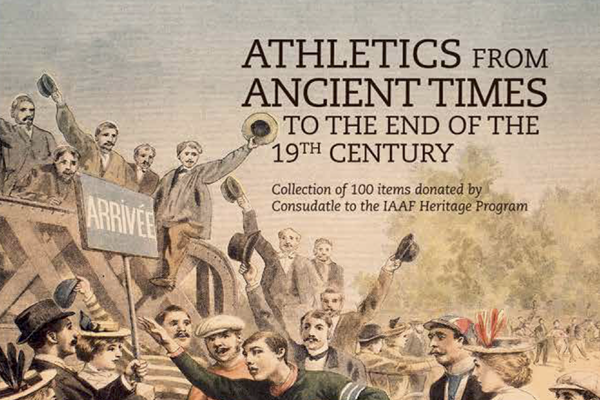 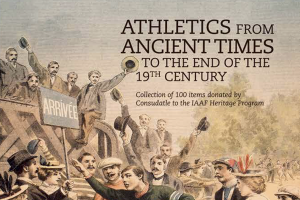 On the last day of the IAAF World Indoor Championships Birmingham 2018 (1 to 4 March), historic athletics artefacts from the ancient Olympic Games to the modern era will be donated to help establish the IAAF Heritage collection.

The IAAF Heritage Memorabilia Donation Ceremony which takes place at midday on Sunday 4 March in Birmingham’s Council House will be attended by IAAF President Sebastian Coe and the leader of Birmingham Council Ian Ward.

A new IAAF department began work in January 2018. IAAF Heritage sets out to preserve the legacy of Athletics, its heroes & heroines, their artefacts, and the documents, video & photographs that portray them and in turn engage with and inspire the stars and fans of the present and future.

“ATHLETICS FROM ANCIENT TIMES TO THE END OF THE 19TH CENTURY”

The ceremony and a media reception that follows it, will mark the official launch of the IAAF Heritage collection entitled ‘Athletics – 3000 years and counting’ which as it develops will travel around the world to IAAF competitions to promote the sport.

Central to the ceremony will be Roberto Gesta de Melo, the President of the South American Athletics Association CONSUDATLE, who, on behalf of the association, will donate a part of their collection to IAAF Heritage which will be officially accepted by Sebastian Coe.

CONSUDATLE, which is the IAAF’s oldest area association, is celebrating the centenary of its foundation this year and is giving 100 items to mark 100 years. These artefacts which include coins, medals, programmes, books and periodicals are catalogued under the title “Athletics from Ancient Times to the end of the 19th Century”.

There will also be a number of other donations of historic memorabilia associated with international indoor athletics made at the ceremony.

Marking the IAAF World Indoor Championships, competition artefacts from some of the most celebrated victories of championship legends Maria Mutola and Haile Gebrselassie will be given on loan to IAAF Heritage from a private collection.

Directly connecting the ceremony to the city of Birmingham, Councillor Ian Ward, on behalf of another private donation, will present the competition bib numbers from two world indoor records/bests set by Gabriela Szabo and Haylu Mekkonen in the Arena Birmingham at the beginning of the century.

Also attending the ceremony will be UKA President Jason Gardener and USA’s IAAF Athlete Ambassador Stacy Dragila, who will be making loans of items from their World Indoor Championships victories, respectively 60 metres (2004) and pole vault (1997).