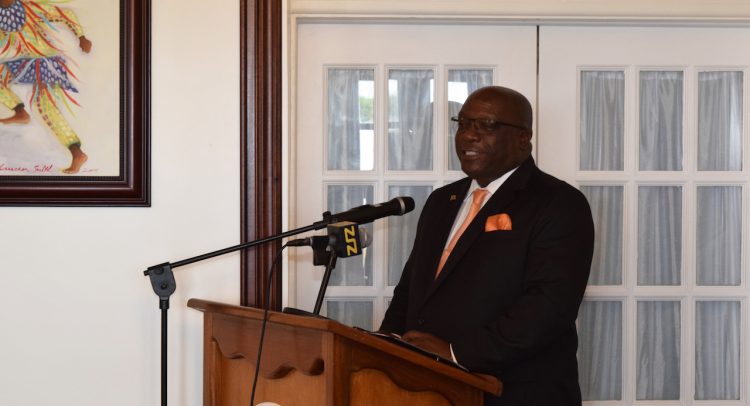 It is a great honour to be in your presence at Government House as we pay glorious tribute to four civically engaged citizens whom His Excellency the Governor-General Sir S.W. Tapley Seaton has just formally invested with Her Majesty the Queen’s New Year’s Honours for the year 2018.

The O.B.E is bestowed upon an individual for playing a major local role in any worthy activity, and today we salute Mrs. Patricia Anelta Hobson O.B.E for her contributions to Education and the Public Sector.

Mr. Ben Francis M.B.E found much success in business with his wife of 51 years, the late Sybil Telca Hawley Francis, having set up Paragon Real Estate and Bentel Nursery and Landscaping.  He soon parlayed his passion for landscaping into a decades-long mission of beautifying communities, using his own resources.

Since 1990, Dr. Ian Jacobs M.B.E has cared for hundreds of children at his private pediatric practice and at the Joseph N. France General Hospital, where for the past 28 years he has occasionally served as the sole pediatric practitioner.  His notable medical career has included a 12-year stint as District Medical Officer at Pogson Hospital.

The Q.P.M is bestowed to an officer of any rank for acts of courage and conspicuous devotion to duty, and today we salute Inspector Alphonso Hendrickson Q.P.M for Services to Policing and in particular to Government House.

Inspector Alphonso Hendrickson Q.P.M has spent the past 29 years serving and protecting Government House and successive heads of state.  In 2006, Inspector Hendrickson Q.P.M began a one-year stint at the Old Road Police Station, where he performed various duties with diligence and skill.  Inspector Hendrickson returned to Government House where he has been ever since fulfilling the trusted role of aide-de-camp to various Governors-General on many occasions.

Today’s investiture is a culmination of all of your years of devoted service, outstanding commitment and leadership.

Today has also been made possible by your families’ encouragement and understanding.

Your families have been the wind beneath your wings so, on behalf of the Government and people of St. Kitts and Nevis, I thank them for sharing you with your country.

Those of us with children – or who have dependents in our care – know they inspire us to contribute to our communities so that we can create a lasting legacy of which they and future generations can all be proud.

They inspire us, and we as parents and providers in turn inspire them.   We inspire them with our unconditional love, the kind of love they deserve and the kind they want to return.  We inspire them by our protection, devotion, our industry, sacrifice and expectation that they will surpass us in what they do and what they become.

By our positive example, they develop a strong work ethic, having learned from our experiences that whatever efforts we put into work or life is what we get out of it.

Family therefore enables us not only to build strong and enduring relationships – and to love – but also drives us to succeed.  Family bestows us with a deep sense of identity, belonging and responsibility.

Indeed, it was responsibility that motivated Mrs. Patricia Hobson and her two children, Damion and Marissa, to carry on with the family business after the untimely passing 26 years ago of Mr. Alphonso Hobson, their beloved patriarch, husband and father.

Mrs. Hobson’s husband, if he were alive today, would be smiling proudly thinking what a fine job she and their children have done growing Hobson Enterprises into a multi-million dollar global business.

The late Mrs. Telca Francis, who passed away just 11 months ago, would be beaming with pride for her devoted husband, Ben, who spent more than half a century by her side being a role model to their son Regiwell.  Reggie is a successful businessman and philanthropist, having walked in his parents’ footsteps.

Dr. Jacobs’ deep sense of responsibility to family steered him toward pediatrics, ensuring the healthy development of many of our nation’s children from infancy through adolescence and adulthood.  Dr. Jacobs is one of the local coordinators for World Pediatric Project, which provides humanitarian outreach to countries in the Caribbean and Central America in the form of advanced pediatric diagnosis and surgery.  Many local children have received free surgical interventions through this project.

Inspector Alphonso Hendrickson’s high level of responsibility saw him move within a period of four years from being a beat and patrol cop to being stationed at Government House after completing his RSS basic training course.  At Government House, he would go on to serve and protect four Governors-General. Inspector Hendrickson Q.P.M has the distinction of working for all of our Governors-General post-Independence.

As the Federation of St. Kitts and Nevis stands three months’ shy away from celebrating our 35th Anniversary of Independence, I take this opportunity to promote the theme: Love, Service, Patriotism and Pride, Independence 35.

Today’s Honourees epitomize the values and qualities espoused in the theme, and serve as excellent examples for their families and for society writ large.

Through their diligence, leadership and hard work, the New Year’s Honours Awardees have achieved great success and respectability.  Importantly, too, they have bequeathed these gifts to their families and to their fellow citizens who admire and emulate them.

Today’s Honourees also give us the timeless gifts of hope and optimism.  They remind us that in this great equalizing Federation of St. Kitts and Nevis it is possible to rise to greatness no matter what family you are born into – indeed, even if you grew up walking barefooted and wearing patched clothes, each and every one of you can travel the path to success and respectability, and each and every one of you can rise – just like Ben Francis M.B.E did; just like Dr. the Rt. Excellent and the Rt. Honourable Sir Kennedy Simmonds, St. Kitts and Nevis’ only living National Hero, did and just like I did.

Out of the huts of history’s shame

Up from a past that’s rooted in pain

Welling and swelling I bear in the tide.

Leaving behind nights of terror and fear

Into a daybreak that’s wondrously clear

Bringing the gifts that my ancestors gave,

I am the dream and the hope of the slave.

From “Still I Rise” poem by Maya Angelou

I put to all of us that the best gifts we can pass on to posterity are belief in God and ourselves, perseverance and love of country and family.  With these intergenerational inheritances, we will surely achieve our goals and the hopes and dreams of those who came before us.