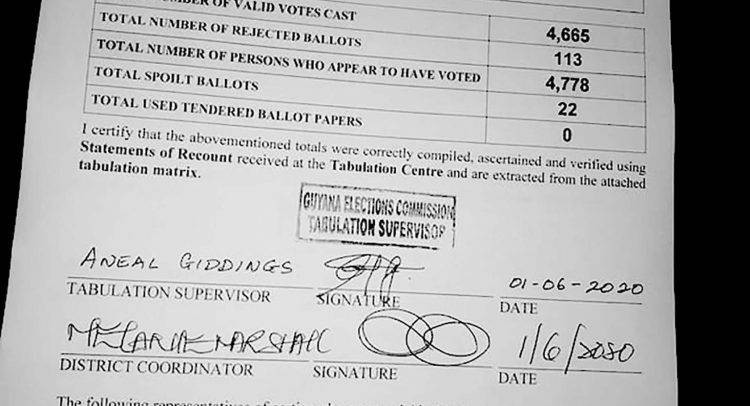 The National Recount exercise on Monday completed recounting 97 ballot boxes, bringing the total number of boxes recounted to 1836. There is a total of 503 boxes remaining to be recounted.

The outstanding electoral districts are Region Six (East Berbice-Corentyne), which has another 55 while Region Four (Demerara-Mahaica) has 400 to be recounted. Region 10 has 48 more ballot boxes to be counted.

On Monday, Region Eight’s (Potaro-Siparuni) recount tabulation was certified. In the General Elections, the APNU/AFC received 2157 votes; PPP/C 2052; LJP 450 and TNM 11. In the Regional elections APNU/AFC received 2091 votes; PPP 2050; LJP 450 and URP 39. Six of the seven completed regions have since been certified with each of the contesting parties, with the exception of APNU/AFC.

The coalition had signed off on the Region One Certificate of Tabulation but refused to sign the others, instead protesting the use of the word ‘valid votes’ ascertained during the recount.

The completed regions have since allowed for counting stations to be reassigned.

As such, five of the 12 counting stations at the Arthur Chung Conference Centre (ACCC) are now dedicated to ascertaining votes cast for Region Four, while four stations have been assigned to Region Six and the remaining three are recounting Region 10.

Meanwhile, GECOM Public Relations Officer (PRO), Yolanda Ward on Monday also addressed the matter of unstamped ballots in light of consternations raised that members of the Joint Services were disenfranchised since their ballots that were supposed to be stamped before being intermixed on Election Day at Polling Stations.

Speaking with reporters in the makeshift media centre on the sidelines of the recount venue—Arthur Chung Conference Centre (ACCC) — Ward related that of the results certified thus far, it was discovered that 1536 ballots had been rejected for General Elections while Regional Elections votes accounted for 1927 rejected ballots.

According to Ward, tabulated results for General Elections in Region One (Barima-Waini) show a total of 380 rejected ballots while votes cast for Regional Elections saw 328 ballots being rejected.

The two other ascertained regions both had lower numbers of rejected ballots.

Ward told media operatives ballots can be found to be rejected for a number of reasons including being unstamped but this category also accounts for “unmarked or void of uncertainty, marked for more than one party’s list of candidates or marked so that the elector can be identified.”

Speaking to the variances found in rejected ballots for the votes cast in General and Regional Elections, Ward explained to reporters that at the time of counting, the ballots are detached, separating the two categories of votes.

She reiterated as an example, cases where half of the ballot bore a stamp while the other half did not and that this could likely be an explanation for the variances.

At least one GECOM Commissioner had suggested this scenario to media operatives as a likely factor leading to some halves of the ballots being found to be unstamped.

She told media operatives that the Commission continues to discuss the matter of unstamped ballots in light of pervasive claims but noted: “I am not sure exactly the direction in terms of their discussion but I am sure that when a decision is arrived that we would formally communicate that.”