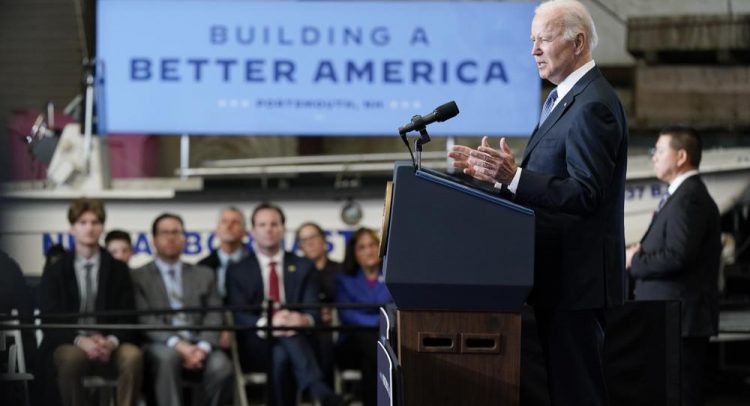 WASHINGTON (AP) — Six months after the signing of President Joe Biden’s $1 trillion infrastructure package, the government said Monday there are 4,300 projects underway with more than $110 billion in funding announced — milestones the administration is publicly heralding as midterm politics intensify.

White House senior adviser Mitch Landrieu, the former mayor of New Orleans, said the roads, bridges and other projects are laying “a foundation for tremendous growth into the future.” Landrieu said Biden and members of his administration have made more than 125 trips to highlight the bipartisan investments in infrastructure. He declined to predict how much the storytelling will resonate with voters as construction starts.

“I think that if Americans step back, we will all have to admit that for the last 50 years we’ve had the need to do this and we haven’t found the will or the way to get it done,” Landrieu told reporters. He added that this is a “wonderful down payment” on infrastructure needs in the country that total roughly $7 trillion.

The administration made a strategic calculation that delivering results would help Democrats retain control of the House and the Senate in this year’s elections. Infrastructure was a rare source of bipartisan unity as Biden struck a deal that attracted several Republican senators. The law contains money to expand internet access and replace lead water pipes and for rail and public transit projects and investments to address climate change.

When Biden signed the law on Nov. 15, he pledged to voters that “America is moving again and your life is going to change for the better.”

Six months later, the stock market is down, inflation is near a 40-year peak, Russia’s war in Ukraine is pushing up energy costs and many Americans feel pessimistic about the economy’s health. There is an open question whether voters will reward infrastructure projects in which the benefits are years away as part of what Biden has portrayed as an “infrastructure decade.”

“All we can do is tell the story about what we do, and the impact that it has on the midterms will be whatever it’s going to be,” Landrieu said.

Of the $110 billion announced so far, $52.5 billion is for federal highway funding this fiscal year and $20.5 billion for public transit. There is another $27 billion over five years for bridges, as well as money for safety, rural highways, airports, ports, drought resilience and other programs.

The infrastructure spending is also one area where political leaders will have to share credit with each other. Governors and mayors are responsible for 90% of the expenditures in the law, while the federal government accounts for 10% of the spending. The administration has actively tried to help state and local governments compete for the money, with Landrieu noting that even Republican critics are generally eager to receive the funding.

“Some really smart person said, you know, even those people that voted no want the dough,” he said. “This is as close to consensus in my political life that I have seen.”

The Commerce Department last week called on states to begin the process of submitting their plans for universal access to high-speed internet. Biden has also taken steps to maximize the likelihood that construction materials are made domestically, as the money has started to go out.

Landrieu said the two biggest challenges of coordinating the spending have involved offering technical assistance to smaller governments and enabling workforce development to fill the jobs being created. There are 7.6 million construction jobs in the U.S., with employers advertising about 400,000 openings in the sector.

Landrieu said that those challenges are also “an unbelievable opportunity to get right something that we actually haven’t been collectively very good at in the country.”

If the government succeeds with coordination and future administrations follow suit, Landrieu said, “America is going to grow exponentially faster and winning the 21st century is not going to be a challenge for us.”

FILE – President Joe Biden speaks about his infrastructure agenda at the New Hampshire Port Authority in Portsmouth, N.H., April 19, 2022. Six months after the passage of the $1 trillion infrastructure package, the Biden administration says 4,300 projects are underway and $110 billion has gone out. The influx of spending is meaningful, though not necessarily enough to cover a long-term underfunding of infrastructure. (AP Photo/Patrick Semansky, File)

Toni-Ann takes on the world