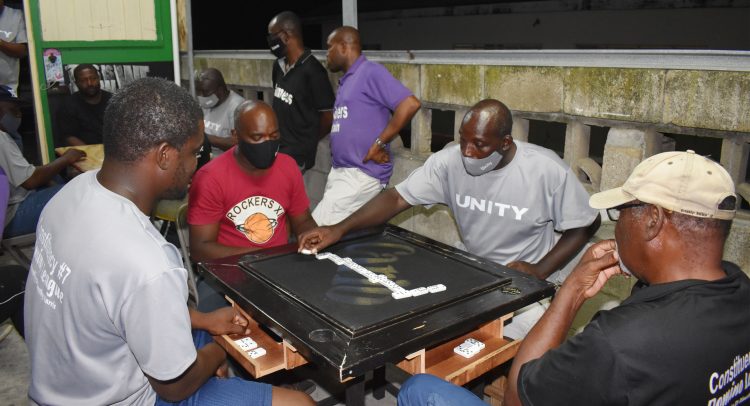 Of the seven games in the eighth segment of play in the second round of the 25th edition of Constituency Number Seven Dr the Hon Timothy Harris Domino League, only two were played with the other five aborted due power outage experienced in most parts of the island on Thursday September 17.

According to President of the league’s Executive Committee, Calvin Farrell, in a statement issued on Sunday September 20 to all the fourteen teams taking part in this year’s competition, the five games that were not played as a result of the power outage have been rescheduled to be played at the end of the fixture.

The final segment of play in the second round of this year’s edition will be on Tuesday September 29, and the five games have therefore been rescheduled for Thursday October 1.

The grounds of the Tabernacle Police Station, where two games were due to be held, had power. Molineux Domino Club once more found their winning form when they edged frontrunners, in terms of points standing third-placed, Tabernacle Domino Club 13-12.

A second game due to have been played at the same venue, between defending champions Parsons Domino Club and Mansion Domino Club did not take off. It is reported that there had been some communication to the captain of Parsons from Mansion to the effect that the game would not take off. However, word did not reach most of the players on the Parsons team as they dutifully assembled at the venue. The game has also been rescheduled.

Hot title contenders, Phillips Domino Club were supposed to meet Unstoppable Domino Club at the Edgar Gilbert Sporting Complex pavilion in Molineux, as were Small Corner Bar Domino Club and Christchurch Domino Club, but the venue had also been affected by the power outage. The two games have also been rescheduled for Thursday October 1.

From the two games played, points standing leaders Unity added six points to their tally and now have 97 points, while their opponents who are at the bottom of the points table Guinness received no point, and their total remains at 20.

Molineux who beat Tabernacle 13-12 received five points to push their points tally to 34, while third position Tabernacle received one point making their tally stand at 86, still behind second-placed Phillips who have 88 points even though they did not play.