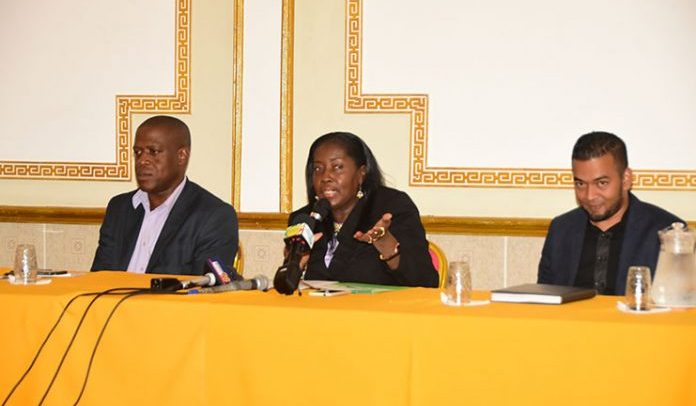 – as CH&PA teams up with seven private developers

MORE than 8000 houses are to be constructed by 2021 following a move by the government on Thursday to officially join forces with seven private housing developers.
The Government wants to speed up the process of Guyanese owing their own homes, especially low-income earners, state employees and youth at a cost of between $4M and $10M. The areas being looked at are Great and Little Diamond, and Prospect, all areas on the East Bank of Demerara. The authorities are also looking at some sections of Cummings Lodge, East Coast Demerara.

At a ceremony to inaugurate the public/private partnership at the Regency Suites Hotel on Hadfield Street, Minister within the Ministry of Communities Valerie Adams-Yearwood, who has responsibility for the housing sector, referred to the new arrangement as an “ambitious” plan on the government’s behalf.

With the areas earmarked being former sugarcane fields, the minister called attention to the fact that it would be very costly to develop the schemes from scratch. “We took our partners on site to see the quality of the soil. At this point in time, we do not have the financing to do all of the infrastructure plus build houses.”

“In the words of our President, ‘We aim to provide accessible and affordable housing in sanitary and safe communities with the necessities for wholesome and dignified living for citizens in need.’ The public sector is building an alliance with willing members of the private sector to advance the cause of providing affordable housing for the Guyanese people,” the minister said.

It is envisaged that the partnership will see an increase in the use of local materials which will lead to benefits to the local manufacturers of construction materials, thus opening the doors for increased supplies. A rise in demand for labour is then expected, thereby resulting in job creation.

According to Adams-Yearwood, while the initiative is being launched in Region Four due to the high demand for housing, it is Government’s intention to replicate this project in other regions of Guyana. “Once we realise this partnership is successful and we have the funding, we are definitely going to take it to the other regions,” she said.
Chief Executive Officer of Central Housing and Planning Authority (CHPA), Lelon Saul, offered that the introduction of this partnership is aimed at addressing shortfall on the supply side, more particularly for low to moderate income families.
“Housing continues to be a mirage to the larger portion of ordinary Guyanese despite several ongoing initiatives. The current rate of delivery is woefully inadequate. There is an urgent need to address the issue of affordability and access to mortgage financing. We recognise at the current rate of production, we will not be able to address the demand in a timely manner,” he pointed out.

The partnership arrangement is therefore expected to bring several benefits, he posited. “Globally, this (public/private partnership) has become the household name in development. It optimises use of public funds and boasts of quality, reduces the burden of public sector financing and promotes greater accountability and monitoring. Once the agreed conditions are met, over 8000 housing units will be delivered throughout the country in the short to medium term.
“We endeavor to put housing within the reach of the small man, the real man. For him, housing will no longer be an elusive dream,” Saul expressed.
He noted how many individuals who were allocated house lots are yet to commence building due to limited access to financing, slothful pace of infrastructural development and low confidence in building contractors.
“The public/private initiative will lower cost units which are durable, built to international standards and are constructed in record time,” he informed.

What’s the difference between indoor and outdoor allergies?

Ebola outbreak EMERGENCY as WHO rolls out vaccine amid epidemic fears 'to kill 11,000'