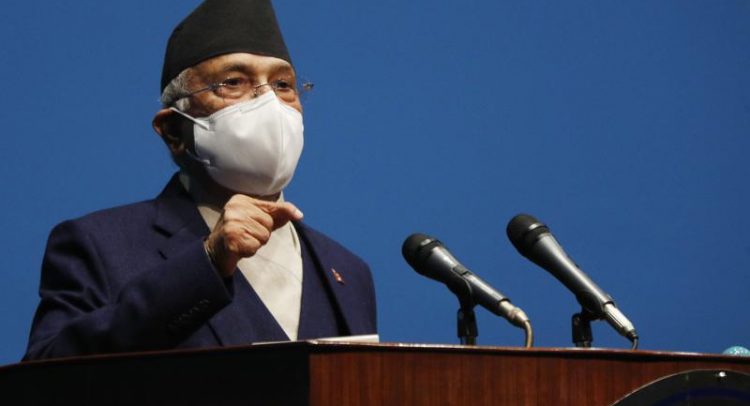 KATHMANDU, Nepal (AP) — Nepal’s prime minister lost a vote of confidence in parliament Monday, ending his attempt to show he has enough support to remain in office.

Only 93 lawmakers backed Prime Minister Khadga Prasad Oli, while 124 voted against him. A new rival faction within his governing party abstained.

President Bidhya Devi Bhandari is expected to ask Oli to lead a caretaker government while parties in parliament seek to form a new government.

Oli’s Nepal Communist Party won elections in late 2017 and he was chosen prime minister by parliament in early 2018. An earlier split in his party in March had already weakened him, forcing him to lead a minority government, and a new split emerged this week.

Oli sought a vote of confidence on Monday in an attempt to demonstrate he had enough support to stay in power.

He has been criticized for his handling of the coronavirus pandemic, with the Himalayan nation reporting its largest number of new cases and deaths in the past few days.

Authorities have imposed a lockdown in most parts of the country since last month and are likely to extend it as hospitals report running out of beds, oxygen and medication.

He became involved in a power struggle, however, with the leader of the former rebels, Pushpa Kamal Dahal, who is also co-chair of the party. Oli has refused to allow Dahal to succeed him as prime minister or lead the party, despite an earlier agreement to do so, causing divisions within the party.

Oli directed the dissolution of parliament in December and announced new elections this year.

The Supreme Court, however, reinstated parliament and canceled the new elections.

Photo: Nepal Prime Minister Khadga Prasad Oli speaks at the parliament in Kathmandu, Nepal, Monday, May 10, 2021. Oli asked parliament for a vote of confidence on Monday in an attempt to show he still has enough support to stay in power despite an expected second split within his governing party. (AP Photo/Niranjan Shrestha)