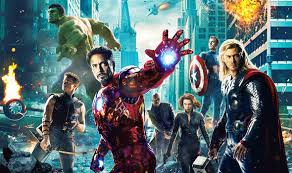 A brief history of the Marvel Cinematic Universe to get you ready for ‘Avengers: Infinity War’ The Marvel Cinematic Universe as we know it is coming to an end in Avengers: Infinity War. But … how did it begin?

When did any of the major events actually happen? Does Black Panther take place before or after Spider-Man: Homecoming? Did Thor really arrive on Earth during the events of Iron Man 2? Steve Rogers went missing in 1945, but how long was he frozen? The first Guardians of the Galaxy and Vol. 2 take place how many months apart?

With 18 movies and counting, there’s a lot to keep track of, and Marvel Studios didn’t make the timeline all that easy. Sure, the night the Winter Soldier killed Howard and Maria Stark may have been explicitly stated on screen as Dec. 16, 1991, but Marvel has been notoriously coy about when “present-day” films actually are set.

But fear not, true believers, our crack team of Marvel experts has got you covered.

And by crack team, we mean one person, me, who spent way too much time watching every single Marvel film looking for blink-and-you-miss-it clues to create what we believe to be the closest to a definitive timeline of Earth-199999.

We’ve created two videos: One for the casual viewer, above, highlights major events from the beginning of time right up until the beginning of Infinity War; the other is for the hardcore MCU maven, featuring every significant moment (and a few seemingly insignificant ones) throughout the history of the Marvel Cinematic Universe. (Check it out on our Facebook page.)

First, a note on our methodology. Before you troll us asking why we set The Avengers in 2010, even though it was released in 2012, let us tell you what we used to figure this all out: Spider-Man: Homecoming.

Yes, the 2017 reboot of our favorite wall-crawler was our key to unlocking the mysteries of the universe. Fans will recall that Homecoming was firmly set eight years after the events of The Avengers, with the majority of the film taking place two months after the events of Captain America: Civil War. That gave us a place to start. Then — and this was a huge deduction on our part, so be impressed — Captain America says he was frozen for 65 years in the detention video Peter is forced to watch. So, if he was frozen in 1945, that means he awoke in 2010. Since Avengers takes place shortly after Steve Rogers was revived, it meant that not only was Avengers set in 2010 but that Homecoming was set in the fall of 2018. In Civil War, former Gen. “Thunderbolt” Ross tells that Avengers they’ve been acting unsupervised for four years, which meant that Winter Solider occurred in 2014. In Thor: Ragnarok, Thor tells Bruce Banner that the Battle of Sokovia was two years ago, meaning Age of Ultron was most likely set in 2016.

Similarly, you might be questioning why Iron Man 3 is set after Thor: The Dark World. Well, that’s in part thanks to a fella named Ben Popplewell, who reminded us that Tony Stark asked Maya Hansen if there was a 12-year-old in her car. Maya then corrected him, saying that the kid would be 13. Since the opening scene is set on New Year’s Eve 1999, a baby theoretically conceived that night would have been born around Sept. 30, 2000. Add 13 years and it equals 2013. We’re good at math.

You might quibble that if Happy Hogan said he has been holding on to Tony’s engagement ring since 2008, wouldn’t that mean that Iron Man 2 was also set in 2008, not 2009? And trust us, we debated that as well. For days. But, then we considered Tony Stark the man and found it perfectly consistent with his character that he would impulsively buy Pepper Potts a wedding ring when he returned from Afghanistan, long before he publicly admitted his feelings to his erstwhile assistant.

We found other clues in featured props. For example, a newspaper glimpsed in Ant-Man showed a photo of Scott Lang dated 2004, implying that Lang was most likely sent to prison in 2005.

We also referenced what little official statements have been made by the studio. Right before the release of The Avengers, Marvel published what was, even then, a fairly complicated timeline of the events leading up to the crossover. The timeline not only showed that Iron Man took place over the course of nine months, it also detailed “Nick Fury’s Big Week” — the overlapping events of Iron Man 2, Thor, and The Incredible Hulk — all of which took place six months after Tony Stark said, “I am Iron Man.” Similarly, writer-director James Gunn has stated that both Guardians of the Galaxy films take place in 2014; and both Kevin Feige and director Scott Derrickson have stated that isn’t a reference to Rhodey’s injury from Civil War in Doctor Strange.

Some of this was, admittedly, pure guesswork. Thanos’s 1996 “adoption” of Gamora was based solely on figuring out her age based on her height. I believed she was 3 or 4; our own Ethan Alter said she was 4 or 5; and my significant other — who with her decades of experience working with children and the ability to Google the average height of a seven year old — firmly stated that if Thanos is 6’7” (marvel.com) then Gamora should be about 7 years old. So we determined her age to be 7 and then, referencing her “current” age, we did some more math and went from there.

Similarly, we chose dates according to what felt right based on available information, such as when Black Widow graduated from the Red Room — she was born in 1984 — or the four-year gap between Avengers and Winter Soldier — again, we refer you to Civil War.

And while, yes, feelings aren’t facts, we’re not talking about real events. We’re talking about fictional characters. Fictional. Characters. So please, save your trolling comments for a post about actual world events.

Suffice to say this timeline is by no means perfect, but in all likelihood it’s the closest we’re going to get to an accurate one until Marvel Studios reboots. Basically: This is all correct, until it isn’t.

Two Years After His Death, The Only People Profiting From Prince’s Estate Are Lawyers