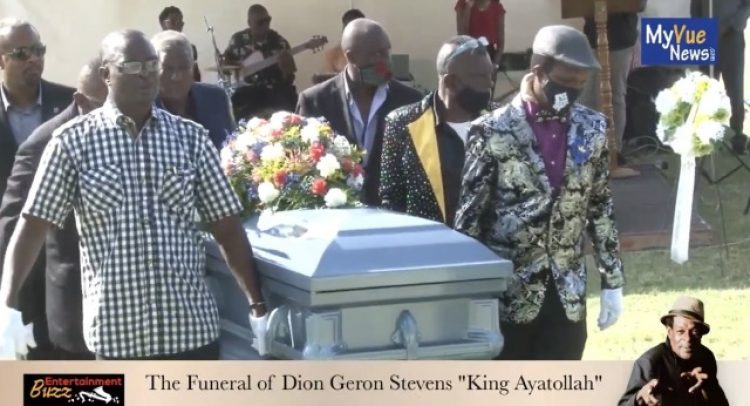 A farewell for a king

Basseterre, 22nd September, 2020, (MyVue News.com) – The funeral service held on Monday 21st September, 2020, for the late King Ayatollah could have been confused, at times, with the energy and excitement reserved only for the Final Night of the Senior Calypso Monarch Competition, at Carnival Village in St. Kitts.

However, in reality, it was a farewell quite appropriate for a king, and especially one as talented and creative as Dion Geron Stevens, known in the calypso world as De King Ayatollah.

Though it managed to maintain its solemnity, the ceremony was filled with excitement, dancing, singing of calypso songs and celebration, featuring live performances from a number of former calypso kings, including those who competed against King Ayatollah during his years in both the Junior and Senior competitions.

They lined the Garden’s Sporting Complex, waiting for hours to have their chance to pay tribute to the man who often referred to himself as “the Bad Boy King”.

The calypso royalty included King Konris, King Craig, King Dwighty, King Astro, King Hollywood, King Kut, and many others who have in the past won titles at the female, Junior and Senior levels.

They came from Nevis and across St. Kitts, all determined to bid farewell to the “Calypso Terrorist” who once ‘threatened’ to bomb them with lyrics.

They sang most of his popular hits, including Bad Boy King, Three Long Years, Calypso Terrorist and Rehabilitation.

All calypso grudges were put aside on Monday and was replaced by a display of unity, as they paid tribute to an artiste who will be remembered for his biting lyrics, majestic glides across the stage and his well known refrains.

Amongst the hundreds present, were the country’s Prime Minister, Dr. Timothy Harris, the Minister of Culture, Jonel Powell and Minister of Tourism, Lindsay Grant. Others in the pool of mourners were former Deputy Prime Minister and former UN Ambassador, Sam Condor, as well as former Tourism Minister, Dwyer Astaphan, who in years past was the subject of some of the controversial lyrics from Tollah, as some called him.

Astaphan also reflected on the moments when they disagreed but also highlighted the times of collaboration and support.

Tracing his life from birth to his untimely death last month, was a long time family friend and supporter, Elreter Simpson Browne. In her reflections, she revealed that it was since birth that Dion had been deprived of what was rightfully his.

She indicated that it was not only in calypso that he was ‘robbed’ but this bad luck visited him from the time of birth on 27th February, 1967 when St. Kitts-Nevis-Anguilla became an Associated State and he was the first baby born on that day.

However, according Simpson-Browne, another ‘Statehood Bay’ was selected, overlooking Dion, simply because, he did not fit into a certain social class.

Throughout his 53 years however, no one needed to educate Dion about his challenges in life, including his shortcomings, because he sang about his misfortunes, in tunes like Rehabilitation…

Tribulation I must get

No human being born perfect

I’m not suffering from inferior complex

No man a solve my problem

The Most High Jah solve dem

On my knees I pray earnestly

To get clean hands on me body

At the funeral, tributes also came from the present Carnival Committee Chairperson, Shannon Hawley and the officiating minister, Reverend Ira Penny, who is a childhood neighbor of Ayatollah in the McKnight Community.

The internment was held at the Springfield Cemetery.

Late-stage study of first single-shot vaccine begins in US