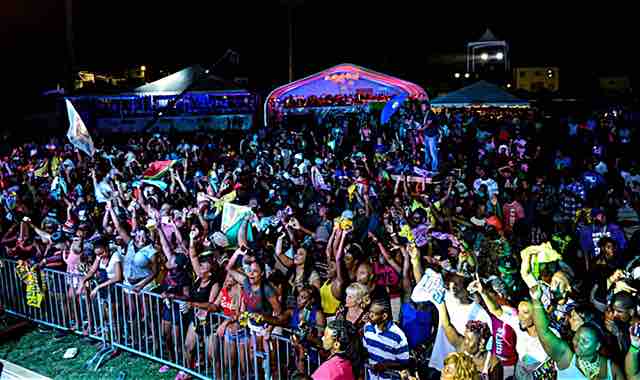 Speaking on Freedom FM’s Island Issues, the chairman spoke of several features and policies that will result in improved experiences at the festival.

Among the improvements to come, said Hobson, are changes to the entire layout of the grounds, taking into account viewing of the stage and the overall ambience of the site.

“From the time you walk into the venue, it is going to be something different,” said Powell, the chairman of the Artistes Selection Committee, also in studio with Hobson.

Another new initiative of the Festival is the ending of the night’s performances by 1 am. According to the Music Festival officials, this would enable patrons to attend after-party events, or fringe activities, that are usually organised.

Hobson said, “That was a major mandate that I got from the Minister last year. He said the economic impact must be felt throughout the economy. Finishing at 4 o’clock in the morning does not allow for fringe activities.”

Hobson said the Committee has organised the festival in such a manner to achieve the 1 am cut-off time.

“Next two weeks when we start talking with vendors about fringe activities, you know the activity will come off, because we will be finishing at 1 am,” the chairman said.

Achieving the earlier end to the night’s performance, also means a trade-off in the number of acts that appear in a single night.

Powell explained, “If you want to finish at one o’clock, you can only have so many artistes. you cannot expect to have six different bands and expect the production time to be the same, as if you had three. At the end of the day, we have timed the show, so we are looking at the one o’clock finishing for each night. By one thirty, you should be out of the park.”

Just as important, the early announcement of the acts of the 2018 St. Kitts Music Festival also has significant benefits for people planning to come to the festival from overseas. Tourism marketing efforts will also be more effective given a more appropriate window for marketing activities, the chairman explained, as he noted one other initiative.

Hobson explained, “We have launched the payment portal on our website, so from anywhere in the world you can buy your ticket. You don’t have to wait until you come to St. Kitts. This is all part of driving the initial concept of the Music Festival, and that is to put heads in beds at that time of the year.”

The St. Kitts Music Festival has become an iconic festival in the Caribbean, and is one of the oldest in the Eastern Caribbean.