A Night of Calypso Bacchanal

The tent was electrifying, with hard hitting social commentaries, jumpy and witty renditions, all mixed in an atmosphere that made you feel like, finally, carnival was on the horizon.

There was never a dull moment, from the time the line-up was kicked off by the veteran Persuader with his lyrically strong calypso, entitled, DE CD; until the curtains regrettably folded just past midnight with the former Calypso King Pungwa, in an inspiring rendition of his song, Rat Race.

Singing a biting political piece titled, “De Doctor Done”, Trashrow delved into what he considered to be all the wrong doings of the current Administration of Prime Minister Dr. Denzil Douglas, but in the end suggesting in very certain terms, that not even the SIDF will, by the next election, save the Labour Party, because as far as he is concerned, when it comes to the wishes of the people, “De Doctor Done”. In other words, suggested Trashrow, the people are done with the current leader. As it turned out, he was the only calypsonian to command an encore, as it appeared that the huge audience of between 800 1,000, just could not get enough.

If that was not enough, there were more volleys of lyrical missiles when the former Green Valley King and past Calypso Monarch Finalist, Godfrey, poured out his harsh feelings of criticism, indicating to the country’s leader that he should not be complaining about the difficulties and challenges of navigating the ship of state, because, as he penned it, “It Comes With the Territory”.

There were many other calypsonians who also had their say about local developments, including the VAT, high cost of electricity, the land swap for debt deal and other issues.

However, bravely in that vast ocean of a pounding calypso storm of political attacks, came the courageous defender of the ruling government, Bra bread. This former Green Valley King is always known for good calypso songs packed with stinging lyrics and he is never afraid to be the lone ranger in defense of the government. Thursday night was no different. Bra bread was in his element, suggesting in the message and title of his song that all those other calypsonians and detractors of the government were doing, was criticizing but offering no solutions. In the end, he surmised that they were all just Empty Vessels. His however, was a difficult time on stage, with sections of the crowd, obviously not supportive of his views, executing a sustained chorus of boos. It seemed, coming on to the end of his performance that the heckling was starting to get the better of him. 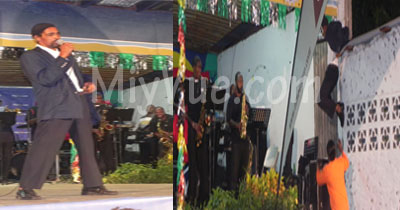 Not even the defending MiyVue.com/ZIZ King of the Tents winner form last year, Rock-a-Fellow, was strong enough later on to shift the spotlight from the unpredictable and extemporaneous champion, De Unexpected, when he entered the stage to perform his popular song called, Economic Parasite. This was another scathing attack on the Right Honourable leader of the country. The crafty calypso examines the failings of the government, in areas that De Unexpected feels, are deserving of exposure.

The next stop will be on Sunday with a clash of the tents at 17 Degrees.  Shortly thereafter, some of these calypsonians will be getting ready for either the Senior Calypso Monarch Competition or the highly popular MiyVue.com/ZIZ King of the Tents Calypso Competition, in mid-December.