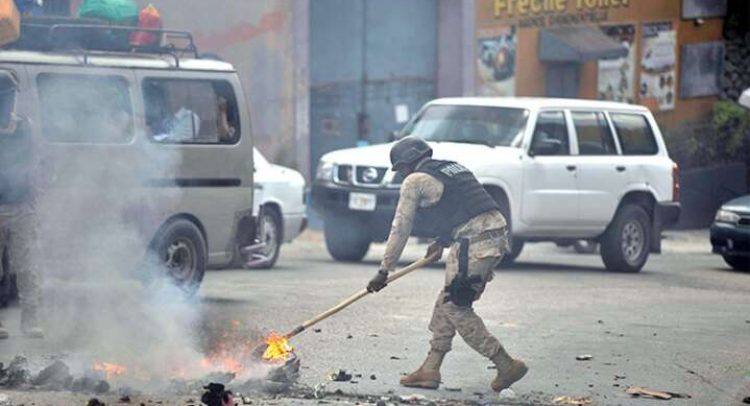 Haiti’s rapid plunge into anarchy has noticeably been greeted with deafening silence by the international community.

Gang-related violence, we note, had been on the increase since the assassination of President Jovenel Moïse in July 2021. It got to a shocking level on Sunday, July 24 this year when a group of masked men invaded the Assembly of God church on the outskirts of Port-au-Prince and shot dead 45-year-old Police Inspector Réginald Laleau.

Inspector Laleau, we are told, was head of a unit that regularly patrols territory controlled by one of Port-au-Prince’s most feared gangs — 400 Mawozo.

After committing the gruesome murder the gunmen left the church, taking Inspector Laleau’s body with them.

Later that evening, 400 Mawozo shared a video showing its leader next to Inspector Laleau’s tortured body and threatening to kill every member of his police unit.

Last Saturday, the violence escalated when a former senator, Mr Yvon Buissereth, and his nephew were killed and their bodies set ablaze in Laboule, an upscale neighbourhood near the Haitian capital.

A Haitian official, Mr Jacques Lafontant, is reported as saying that the senator and his nephew were likely killed by a gang trying to control the area.

We are told that gangs in Port-au-Prince and beyond have become more powerful and have been waging violent turf wars since July 2021.

Human rights groups have classified 60 per cent of the capital city is “lawless”. Early last week the United Nations Integrated Office in Haiti (BINUH) reported that at least 94 residents were killed and more than 120 injured by gunfire while 12 others disappeared in less than three weeks of fighting between rival gangs in the north and west of Port-au-Prince.

BINUH also said that at least 96 gang members were killed or wounded and dozens of cases of sexual violence were reported.

According to BINUH, women and children as young as one-year-old were executed and their bodies burnt. Teenagers, accused of spying for the opposite side, were shot in public spaces. “Rape against women and girls, some of whom were less than 10 years old, was used as a weapon to terrorise and take revenge on the local populations living in neighbourhoods controlled by rival gangs,” BINUH added.

Additionally, almost 16,000 people were forced to flee their homes to take refuge in makeshift sites or the homes of relatives. Among them are children whose homes were burnt by gangsters. A wire service report quotes a nun as saying that “A little girl saw her father immolated in front of her”.

So far, the World Food Programme has provided more than 10,000 hot meals to all the sites where unaccompanied minors have been settled. But the humanitarian crisis is getting worse by the day, and the international community is merely reclining and watching the awful and frightening developments.

Maybe the countries that can offer assistance, particularly in the area of security, are experiencing aid fatigue, due to their own challenges with the novel coronavirus pandemic and the cold, hard fact that Haiti has proven a most difficult nation to settle down.

That, however, should not prevent them from trying to help. Haiti, after all, is populated by human beings, and people should not be left to languish in the conditions that now exist there.

A policeman clears debris off a street after a demonstration to demand the resignation of Prime Minister Ariel Henry, in Port-au-Prince, Haiti, Thursday, July 28, 2022. (Photos: AP)