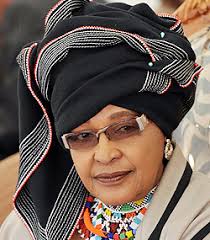 A song for Winnie

It was hard not to follow the anti-Apartheid struggle in South Africa during the 1980s when international pressure mounted for an end to racial oppression in that country. Carlene Davis found a heroine in Winnie Mandela.

In 1987, Davis recorded Winnie Mandela, a tribute to the feisty freedom fighter who died in Johannesburg yesterday, at age 81.

In an interview with the Jamaica Observer, Davis said the song was written and produced by her husband Tommy Cowan. He was inspired to write a tribute to Winnie Mandela after reading a biography about her and the relentless fight she led to get her husband, Nelson, freed from prison.

“He (Cowan) returned from the United States and brought home a book entitled Part of My Soul Went With Him by Mary Benson. It didn’t take me long to finish reading the book. It was all about the struggle of Winnie Mandela in her fight against the injustices she faced in Apartheid South Africa,” Davis recalled. “Prior to that, I knew very little about her struggle except for the constant TV news items of protest and much unrest in South Africa. After reading that book I was moved to record the song.”

Winnie Mandela is on Davis’ album, Taking Control, released in 1987 by VP Records.

Davis met the Mandelas when they visited Jamaica in July 1991 for one day at the invitation of Jamaica’s government. Nelson Mandela was released from prison after 27 years in 1990, prompting her to release the song, Welcome, home, Mr Mandela.

“I was invited to a special official gathering led by Portia Simpson, Babsy Grange and Beverley Manley and members from the Bureau of Women’s Affairs. It was at that meeting I presented her (Winnie) a copy of the song and she told us that the music from Jamaica motivated them to keep believing in the fight for freedom,” Davis recalled.