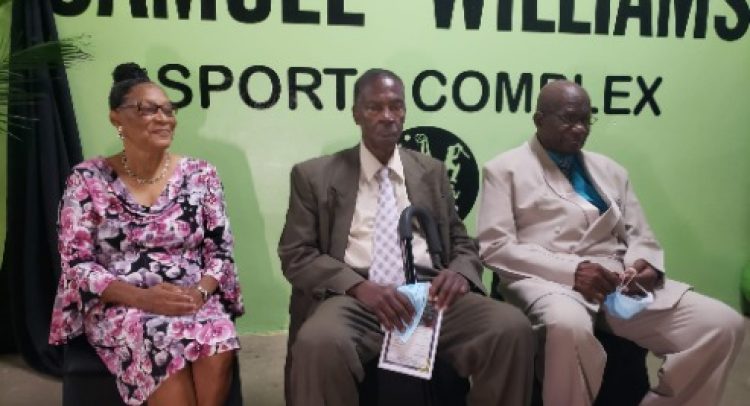 Basseterre, Tuesday, 21st September, 2021, (MyVue News.com)-Two of the most celebrated residents of the Old Road and Verchilds communities were recognized over the past weekend for their outstanding contributions to sport and community development.

Parliamentary Representative for the area and Minister of Tourism, Lindsay Grant, was joined by his Cabinet colleague, and Minister of Sport, Jonel Powell, for the ceremony that was held on Saturday afternoon, 18th September, 2021.

In the presence of representatives from the sporting fraternity, family members, friends, and other government officials, the ceremony was used to rename, what was called the Verchilds Play Field, to the Samuel Williams Sporting Complex.

A release from the government quoted the Member of Parliament for St. Christopher #4, the Lindsay Grant, as saying that the renaming of the facility “is very important because when a community, or a society, sees it fit to pay tribute to its residents and citizens, this sends a clear and unmistakable message that people count and what we do in the service of others matters.”

The two honourees were Vincent Williams and St. Clair Samuel.

St. Clair “Monty” Samuel played football and cricket and had a passion for sports overall.

His cricketing prowess, back in the 1970s, left many wondering why he was not selected to play for the West Indies cricket team.

After his playing days, he excelled as a referee in football. He also contributed to the development and maintenance of the Verchilds Playing Field, said an official release.

Vincent Williams on the other hand is renowned for his 40 years of dedicated service in developing sports in the Old Road and Verchilds communities.

This includes managing teams in football and cricket and advocating for the expansion of the Verchilds Playing Field.

In addition to the re-naming exercise, the Ministry of Sport also used the occasion to commission a new lighting system, which the Minister of Sport, Powell said was part of the efforts to ensure that the continued development of sports remains a priority for the government.

“Sports matters,” he stated. “It is essential to our physical and mental health; it defines us; entertains us; brings us together; builds a sense of community and belonging; fosters inclusion and resilience from being a part of a team, a participant, or even spectator.

The Ministry of Sport is excited to be continuing its national initiative of upgrading all sporting facilities on St. Kitts, added Powell.

Powell said this is an initiative that is not just about providing better sporting facilities, it is about building stronger, healthier communities by promoting physical activity, social connection, and economic vitality.”

He referenced the commissioning of the outdoor sports lights at the facility and noted that the government invested $1.48 million in procuring and installing the LED lights.

The minister indicated that outdoor sports lights will also be mounted at the basketball and netball courts as part of a wider upgrade project in the area.

Powell indicated that the Ministry of Sport would ensure that well-maintained and functional sporting facilities remain available and accessible to all involved in competitive and recreational sports as outlined in the National Sports Policy 2020-2025.