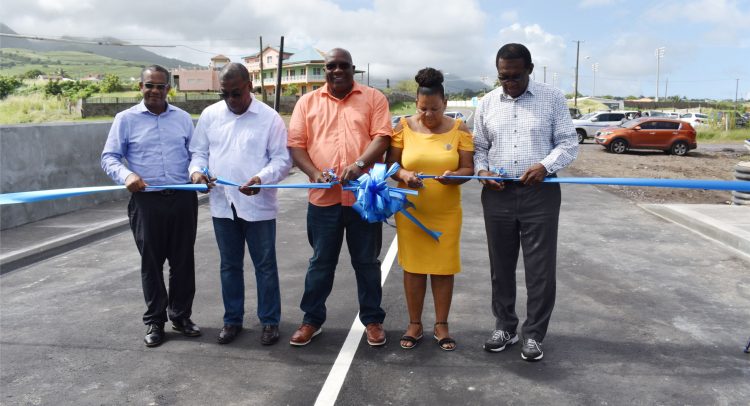 Minister of Public Infrastructure the Hon Ian Patches Liburd is thanking the people of St. Christopher One (East Basseterre) for giving him, in 2015, the opportunity to serve as their representative and having earned the name ‘Action Minister’ he is asking them to renew the mandate on June 5 for him to continue with the job he has done so well.

“I want to thank the people, the families of East Basseterre for continuing to put their confidence in me and I can assure you once given the opportunity again, I will never let you down,” said the Hon Ian Patches Liburd on Sunday May 31 at a Team Unity Stronger, Safer Future – Virtual Candidate Launch, where he was launched as a Team Unity Candidate.

The colourful virtual candidate launch ceremony was chaired by Team Unity’s candidate for St. Christopher Three (West Basseterre) Senator Akilah Byron-Nisbett. It was also addressed by among others, Prime Minister Dr the Hon Timothy Harris, and Deputy Prime Minister the Hon Shawn Richards, all who endorsed the minister.

The Hon Liburd had approached the people East Basseterre in 2013 and offered his service and according to him, begged them for a job to serve them. On the 16th of February 2015 he was elected as the new representative and he thanked them for that gesture.

“The people of Constituency Number One sent me to Government to work,” said the Minister of Public Infrastructure. “I can report to you tonight: When Prime Minister Harris called on me to lead the transformation of the country, to lead the charge of infrastructure development and national transformation effort, I was ready. I rolled up my sleeves – I had no jacket to take off, and the rest is now history.”

Some of the projects that he has accomplished as the Minister of Public Infrastructure include resurfacing of the Island Main Road; a new Basseterre Ferry Terminal; resurfacing of the RLB International Airport, with brand new solar runway lighting; installation of traffic lights in Basseterre’s Central District; East Line Bus and West Line Bus terminals; and the second cruise pier.

Minister Liburd is also credited for the repainting of Tucker Clarke Primary School; installing lights at the Paddock at the Ponds Pasture; paved roads and upgraded the playfield in Taylors Village; constructed sidewalks in Bird Rock, Ponds Extension, and Wellington Road; fixed storm drains in many areas including on Pond Road, and Sandown Road; and delivered housing to the people of East Basseterre. Above all, he gave half of his salary to go towards needy persons in the Constituency.

He told the audience that if anyone comes to them to say he will do those things for them, that they should tell him ‘Patches done do that’.

“Come Friday the 5th of June, I ask you to go out in your numbers and send a message,” advised the Hon Liburd. “I have outlined all my plans in the manifesto I circulated. I won’t go through all of them, but there will be development and youth opportunities for all of us in East Basseterre.”

In the meantime, Prime Minister Dr the Hon Timothy Harris told the people of East Basseterre that he is confident that the Team Unity Government in its second term will be so much stronger because it will have Ian Patches Liburd, their man, as part of the government.

“I want to say to Patches how proud I am that as a representative that has been so busy, he has been among the busiest of the ministers,” said Dr Harris. “He has been busy working for an entire country and we could see the fruits of his labour. And so my appeal to you in East Basseterre, Patches has over performed as a minister. We need you to reward him for competent service to the people of East Basseterre and for the country and I say to you, lend him your vote. “

Facebook in turmoil over refusal to police Trump's posts