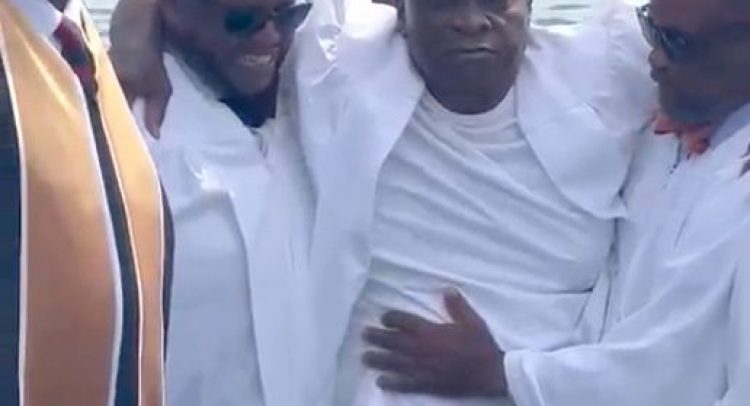 The Mighty Sparrow is one of the pioneers of the Calypso artform in Trinidad and Tobago and is known for his provocative lyrics and songs such as the “Congo man” and “No Money, No love.”

Francisco was born in Grenada in 1935  but was less than two years old when his family migrated to Trinidad in 1937. He made his professional debut in 1954 at the Old Brigade Tent where he sang as the Little Sparrow.

Dottin is confident that the Mighty Sparrow will be an asset in the church’s evangelical outreach.

“Sparrow desired to give his heart to God and we say praise God for that. We believe he has a gift of singing. God has given him the talent. Now, he’ll have a new focus. He’ll keep singing songs to keep encouraging people to follow his example. He’ll draw a wider cycle in the religious realm. In fact, his daughter was also baptised yesterday (Saturday) with him,” Dottin told Guardian Media.

In 1987, Francisco was awarded an Honorary Doctorate of Letters at the University of the West Indies, St Augustine.

According to the website, Caribbean Elections, Sparrow continued to write, perform, and tour into the 21st century. In a 2001 interview, he mentioned that he had been singing and performing a “Gospel-lypso” hybrid.

In 2008, he released a song supporting Barack Obama’s presidential campaign, “Barack the Magnificent.” He also did a remake of his “Congo Man” song with Machel Montano on the Flame album.

On February 19, 2014, then Prime Minister Kamla Persad-Bissessar announced that Sparrow would receive the highest national award, the Order of Trinidad and Tobago.

Guardian Media attempted to reach out to Francisco on Saturday after he was baptised, but when we called we were told he was not available at that time to speak.