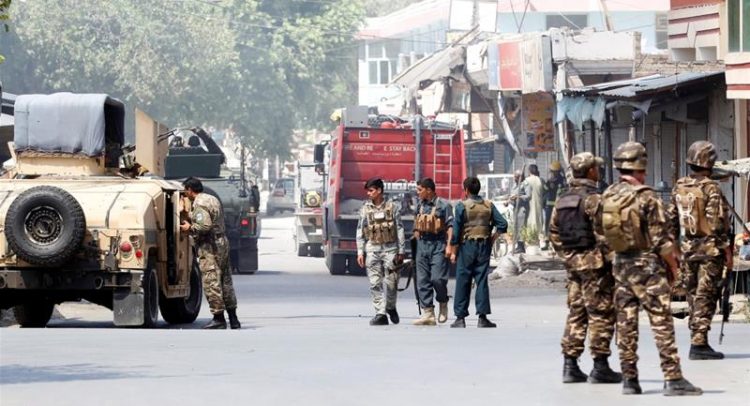 A standoff between two gunmen who took dozens of people hostage at a government building in the eastern Afghan city of Jalalabad has ended, according to officials.

The gun battle at the city’s refugees and repatriations directorate compound lasted for about six hours on Tuesday before Afghan special forces were able to end the siege.

At least two people were critically wounded and 10 others suffered lighter injuries. They were being treated in the hospital next-door to the targeted compound.

“There were multiple people inside the building during the attack,” Al Jazeera’s Charlotte Bellis, reporting from Afghanistan’s capital, Kabul.

“There were two gunmen who set off multiple explosions outside the compound before going inside, where a donor conference was going on to help refugees in Afghanistan”, she said.

Witnessess said at least three explosions went off, according to Bellis. She said the targeted building is in a “very sensitive area, with the United Nations compound next door and a large hospital on the other side”. According to one witness, a passer-by named Obaidullah, the attack began when a black car with three occupants pulled up at the entrance to a building used by the department of refugee affairs, and a gunman got out firing around him.

One attacker blew himself up at the gate and two gunmen entered the building, which is in an area close to shops and government offices, Obaidullah told Reuters news agency. Minutes later, the car exploded, wounding people in the street, he said. “We saw several people wounded and helped to carry them away.”

ohrab Qaderi, a member of the local provincial council, said around 40 people appeared to be caught inside the building, which caught fire in the initial stages of the attack. One hostage had called the security services and told them that the attackers had ordered the people inside not to move, he said.

Provincial government spokesman Attaullah Khogyani said the attack happened during a meeting with NGOs working on refugee-related issues. The head of the directorate and several other people were taken to safety, he said.

There was no immediate claim of responsibility for the attack.

The blast is the latest in a series of attacks that hit Jalalabad, the capital of Nangarhar province, in recent weeks, killing and wounding dozens of people.