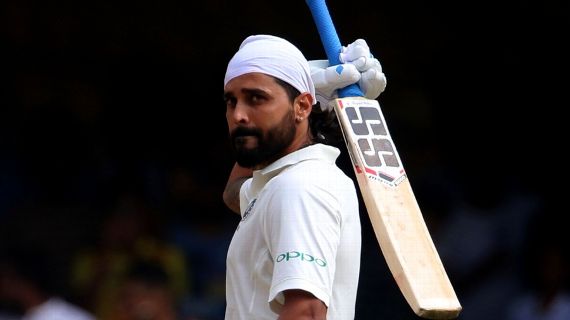 On their first day in Test cricket, Afghanistan looked like they wanted to experience the full range of emotions: they conceded 52 fours and four sixes, made a DRS blunder early on, dropped a catch late in the day, enabled two very different types of centuries, and still, somehow, managed to dominate an entire session and stay alive. India, who were 280 for 1 at one stage, and striking at well more than five per over thanks to domineering efforts from their top three Test openers, lost 5 for 63 in the final session.

Afghanistan had had a decent first half hour, with both Wafadar and Yamin Ahmadzai getting the ball to move around in Bengaluru’s dense atmosphere. But neither could apply sustained pressure on India’s openers. Shikhar Dhawan, in particular, was given too many boundary opportunities through short-pitched bowling that remained a feature throughout the day.

Afghanistan captain Asghar Stanikzai looked forlorn very early on, attempting to stop the glut by gradually chopping his slip cordon in the face of a rampaging opening stand and a knee injury to Ahmadzai in the eighth over that kept him out for the rest of the first session. But his most remorseful moment as a Test captain came when neither Wafadar, who had drawn a faint edge from Dhawan, nor wicketkeeper Afsar Zazai, who had made the most boisterous appeal, came to his aid when he looked for consultants to overturn the not out decision. Standing in the slips, Mohammad Shahzad was the only player urging his captain to take the review, but Stanikzai, drowned out by too many opinions, didn’t pay heed.

When replays showed a murmur as the ball passed bat, a collective annoyance gripped the visiting team. It was almost like Dhawan sensed it. He spent the next 70 or so minutes flogging his Sunrisers Hyderabad team-mates, Mohammad Nabi and Rashid Khan, neither of whom looked in control, erring too short to prevent him getting down the track or, in the latter’s case, serving up generous full-tosses. By the middle of the first session, with Mujeeb ur Rahman also taking a pasting, Afghanistan already looked defeated. Seventeen overs after that caught-behind appeal, Dhawan had become the first Indian to make a hundred before lunch on the first day of a Test. Despite a shaky, struggling M Vijay at the other end, India had put up 158 without losing a wicket by lunch.