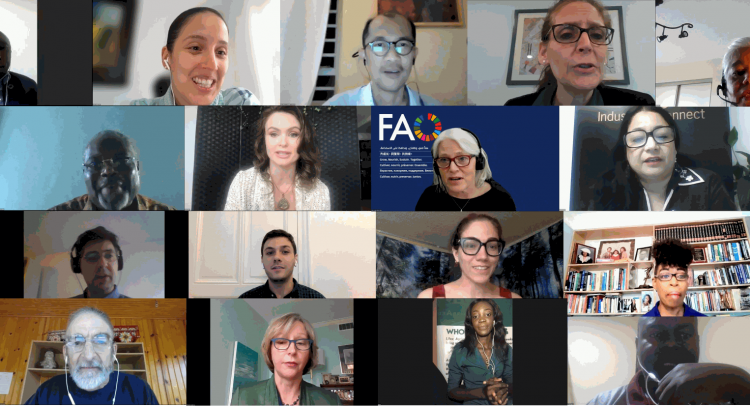 San Jose, 17 May 2021 (IICA) – The world is on an irreversible path to more sustainable agriculture that will ensure food security while favoring social inclusion, reducing the environmental impact, and affording opportunities to the inhabitants of rural areas, especially women and youth.

A number of organizations, specialists, and activists from different countries took part in a dialogue entitled “Victory Gardens: A model to improve food security and nutrition-sensitive agriculture”, organized around this issue in preparation for the Food Systems Summit 2021 convened by UN Secretary-General, Antonio Guterres.

The meeting, proposed by Ntiokam Divine, founder and director of the Climate Smart Agriculture Youth Network (CSAYN), brought together IICA and representatives from the different continents.

CSAYN is based in Cameroon and is made-up of volunteers from Africa, Asia, the United States, and Europe who work to raise awareness among the youth and vulnerable populations of the importance of agriculture as part of the solution in the fight against climate change.

The model known as “Victory Gardens” has its roots in the First World War, when a severe food crisis emerged in Europe and the Americans were called to grow fruits and vegetables in their own back yards and idle land so that more food could be exported to Europe.

The spirit of Victory Gardens is promoted today by the Foundation for Building Sustainable Communities (FBSC), among other organizations. “The model has been tested for over a century to tackle food security and develop the capacity of the people to grow food”, explained Joan Kerr, creator and president of Canada-based FBSC.

“It’s a path to producing not only more, but healthier foods while we focus on mitigating and adapting to climate change. We want people to care about the nutritional value of their food and the health of the soil where it is grown. We encourage local food consumption to establish a tie between the consumers and producers”, added Kerr.

Priscila Zúñiga, International Technical Cooperation specialist at the Inter-American Institute for Cooperation on Agriculture (IICA), highlighted the number of challenges facing food production going forward, including social, environmental, and economic. “Poverty in rural areas is practically double what it is in urban areas in Latin America and the Caribbean”, she said.

Zúñiga also underscored the importance of fully incorporating new technologies to transform the way foods are produced. “Digital technologies facilitate access to knowledge, ensure the power of information, and serve to monitor production”, she added.

The IICA specialist also believes that work should focus on reducing the digital divide that disfavors rural inhabitants. She maintains that digital agriculture should be incorporated more inclusively, “to achieve more efficient production methods and ensure no one is left behind”.

IICA is a member of the Food Systems Champions Network—a group of individuals and organizations committed to its objectives—in representation of the agricultural and rural sectors of North and Latin America and the Caribbean.

The global summit was convened by the UN to raise public awareness and to lay the foundation for global commitments and measures to transform the agri-food systems, not only to eradicate hunger, but also to reduce the incidence of food-related diseases and contribute to environmental conservation.

Oliver Oliveros, Coordinator of the Champions Network for the Food Systems Summit 2021, affirmed that the global summit will serve “to rebuild food systems with an emphasis on safe, nutritious foods for everyone. Hunger still exists, even though we produce enough food, and the Covid-19 pandemic has made the problem even more visible”.

“Food is a fundamental part of our lives; not only is it a necessity, but it is also a fundamental element of our cultures, our families, and our societies. We need to work for the transformation the world needs,” stated Oliveros.

Jane Lowicki-Zucca, Youth Advisor for the United States Agency for International Development (USAID), stated that “agriculture could generate a number of jobs and millions of young people could capitalize on the opportunities generated by the agri-food markets”. Along this line, she asserts that the youth need to be supported by state and private organizations to take the lead on their own initiatives, which is especially critical in areas with vulnerable populations.