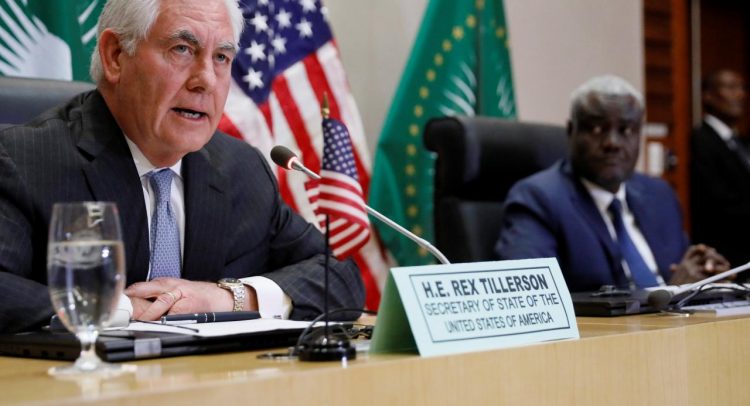 Africa should avoid forfeiting sovereignty to China over loans: Tillerson 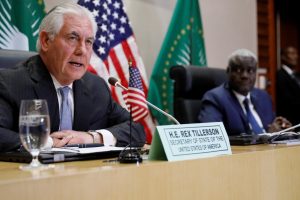 U.S. Secretary of State Rex Tillerson said on Thursday that African countries should be careful not to forfeit their sovereignty when they accept loans from China, the continent’s biggest trading partner.

Tillerson is using his first diplomatic trip to the continent to bolster security alliances on a continent increasingly turning to Beijing for aid and trade. [L5N1QP17F]

“We are not in any way attempting to keep Chinese dollars from Africa,” Tillerson told a news conference in the Ethiopian capital. “It is important that African countries carefully consider the terms of those agreements and not forfeit their sovereignty.”

The United States is the leading aid donor to Africa but China surpassed it as a trade partner in 2009. Beijing has pumped billions into infrastructure projects, though critics say the use of Chinese firms and labor undermines their value.

If a government accepts a Chinese loan and “gets into trouble”, he said, it can “lose control of its own infrastructure or its own resources through default.” He did not give examples.

The growing Chinese lending to the continent has also attracted criticism from some Africans, who say China’s agenda is to feed its appetite for African raw materials like oil, timber and minerals, and secure contracts for its firms.

“It was not appropriate to criticize the relations of his hosts — when he was a guest there — with another country,” he said. Many African governments enjoy close ties with both Washington and Beijing.

Asked about Tillerson’s criticism of China’s approach on the continent, Kenya’s foreign affairs minister Monica Juma said: “This country is engaging with partners from across the world driven by our own interests and for our own value.”

Tillerson arrived in Ethiopia, Africa’s second most populous nation, on Wednesday and visited the African Union headquarters on Thursday. The complex was funded and built by China and is seen as a symbol of Beijing’s thrust for influence and access to the continent’s natural resources.

Ethiopia is home to some of Beijing’s biggest investments, from a railway to Djibouti that opened last year to factories and industrial parks.

Ethiopia’s prime minister resigned suddenly last month and a state of emergency was imposed but protests in the restive Oromia region have continued.

The secretary of state met Hailemariam Desalegn, who resigned as prime minister but is still acting in the post awaiting a replacement. Details of their discussions were not released.

Tillerson said after meeting his Ethiopian counterpart Workneh Gebeyehu that the answer to political turmoil in Ethiopia was greater freedoms and said state of emergency should be lifted as quickly as possible.

North Korea has more than a dozen embassies on the continent. The Trump administration has said that Pyongyang earns hard currency from arms deals with African government and the trafficking of wildlife parts from Africa.

Tillerson is due to fly to Djibouti, host to military bases owned by the U.S., China, Japan, France, and Italy.

He will then visit Kenya, a key U.S. ally in the fight against al Shabaab Islamist militants in Somalia, before traveling to Chad and Nigeria, which are also battling to contain Islamist insurgents.

Analysts say Trump has focused mainly on security concerns in Africa at a time when China, Turkey and other nations are ramping up diplomatic and business links.

“When you look at the set of countries that are being visited I think it kind of reinforces the perception that security, indeed, is the overwhelming focus,” said Brahima Coulibaly, the director of the Africa Growth Initiative at Brookings Institution.