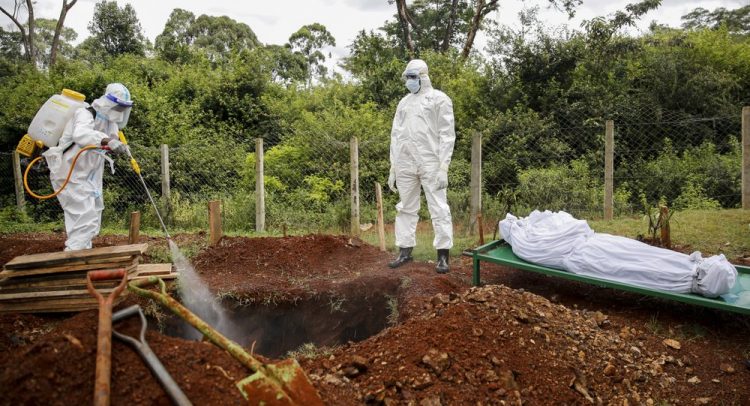 JOHANNESBURG (AP) — Africa’s coronavirus cases have surpassed 100,000, the Africa Centers for Disease Control and Prevention said Friday, as the youthful continent with many fragile health systems has not seen the high numbers devastating other parts of the world.

The pandemic “appears to be taking a different pathway in Africa,” the World Health Organization said. It is not yet clear why.

But one worrying development is the number of infected health workers — more than 3,400 — in a part of the world where staffing is largely threadbare. Some workers have threatened to strike over insufficient protective gear.

The African continent saw roughly the same number of new cases in the past week as the week before, Africa CDC director John Nkengasong said Thursday, adding that “we hope that trend continues” instead of a rapid exponential increase.

The pandemic had a head start in places like Europe and the United States, and many African governments responded quickly. While early lockdowns in most of the continent’s 54 countries slowed the growth of the pandemic, Nkengasong said “that doesn’t mean Africa has been spared.”

But health officials are not seeing a lot of community deaths or “massive flooding of our hospitals” because of COVID-19, he said.

“For now COVID-19 has made a soft landfall in Africa, and the continent has been spared the high numbers of deaths which have devastated other regions of the world,” WHO Africa chief Matshidiso Moeti said Friday. “But we must not be lulled into complacency.”

Cases could increase significantly now that many countries are easing lockdowns, the WHO said.

The situation across the continent remains quite varied, the WHO emergencies chief, Mike Ryan, told reporters Friday. In the past week, four African countries had an increase in virus cases of over 100%.

He noted Africa’s young population, median age under 20, but said it “doesn’t in any way reduce the chance the disease will spread.” And no one knows what impact the virus will have on millions of undernourished people and overcrowded refugee camps. “So there’s still a lot to be learned.”

Testing in Africa remains low. The Africa CDC has said the continent needs to increase testing about 10-fold. It should strive to test at least 1% of the population, or 13 million people, but so far about 1.5 million tests have been conducted. Shortages of equipment remain a problem.

South Africa has been testing assertively and leads the continent with more than 19,000 cases.

But countries with fragile health systems and a recent history of conflict like Somalia and South Sudan remain a worry for health officials as cases rise. And in Tanzania, where the president claims the virus has been defeated by prayer, the government hasn’t updated its case numbers in three weeks.

Africa’s worst-case scenario, according to published models, would see more than 3 million infected with more than 300,000 deaths and “that would be overwhelming for sure,” Nkengasong said. But he warned that “models are only as good as the assumptions we put in there.”

Photo: FILE – In this Thursday, May 7, 2020 file photo, members of a team dedicated to burying muslim victims of the new coronavirus spray disinfectant into the grave before burying Mohamed Ali Hassan, whose cousin said had been unaware he had the new coronavirus and died in his house in the Eastleigh area, at the Langata Muslim cemetery in Nairobi, Kenya. Africa’s coronavirus cases have surpassed 100,000, the Africa Centers for Disease Control and Prevention said Friday, May 22, 2020 as the continent with many fragile health systems has not yet seen the high numbers of other parts of the world. (AP Photo/Brian Inganga, File)