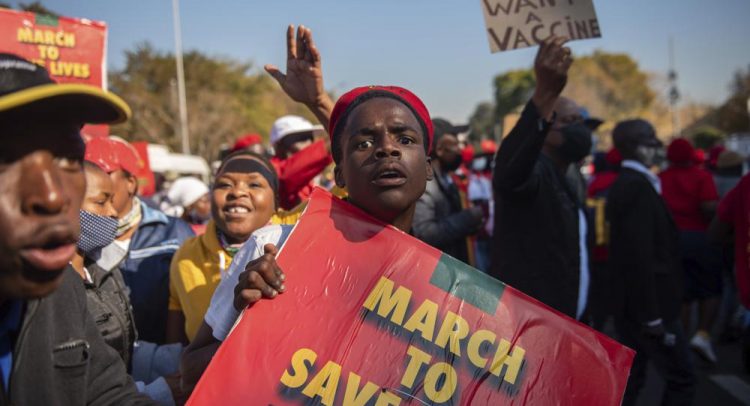 NAIROBI, Kenya (AP) — The African Union special envoy tasked with leading efforts to procure COVID-19 vaccines for the continent is blasting Europe as Africa struggles amid a crushing third surge of infections, saying Thursday that “not one dose, not one vial, has left a European factory for Africa.”

“The situation could be very different had we known back in December that ‘Listen, this help is not coming, do for yourselves,’” Masiyiwa told reporters, adding that “many countries were just sitting back saying, ‘the vaccines are coming.’ … We as Africans are disappointed.”

The criticism revealed African leaders’ sheer exasperation at the world’s dramatic vaccine divide, with Masiyiwa describing vaccinated, unmasked Europeans attending football matches while just 1% of Africans are fully vaccinated against COVID-19. The continent has the lowest vaccine coverage in the world.

Masiyiwa stressed that Africa has purchased 400 million vaccine doses and can buy more, but he challenged donors: “Pay up your money … We will no longer measure pledges, we will measure vaccines arriving at our airports.”

The African continent of 1.3 billion people is now in the grip of a third surge of infections that is “extremely aggressive,” the head of the Africa Centers for Disease Control and Prevention, John Nkengasong, told reporters. Health officials have described overflowing COVID-19 wards, dangerous oxygen shortages and a growing spread of the virus to extremely vulnerable and unequipped rural areas.

Masiyiwa said COVAX had promised to deliver 700 million vaccine doses to Africa by December. But at mid-year, Africa has received just 65 million doses overall. Less than 50 million doses via COVAX have arrived.

“We are very far away from our target,” Nkengasong said. “We don’t want to be seen as the continent of COVID … (In Europe) the stadiums are full of young people shouting and hugging. We can’t do that in Africa.”

Spokespeople for COVAX did not immediately respond to a request for comment.

The World Health Organization in a separate briefing said COVID-19 case numbers are doubling in Africa every three weeks and the highly contagious delta variant is driving the new wave of infections.

And the Lancet COVID-19 Commission African Task Force made an urgent appeal for at least 300 million vaccine doses so every African country can fully vaccinate at least 20% of its people by the end of August. It said 46% of the U.S. population is fully vaccinated, with about 33% in the European Union and about 40% in China.

Nkengasong and Masiyiwa did announce some vaccine progress, saying the first shipments of Johnson & Johnson and Pfizer doses based on U.S. support will begin arriving next week. It was not clear how many doses would be in the shipments. Meanwhile, more African-purchased doses will arrive in August, Masiyiwa said.

The African continent has had 5.5 million confirmed COVID-19 infections and has seen a “remarkable” 23% increase in deaths over the past week, the Africa CDC director said.

He said the continent needs 1.6 billion doses in a double-dose regime, or 800 million for a single-dose regime, to meet the goal of vaccinating 60% of the population.

Masiyiwa gave a frank accounting of where global efforts to vaccinate the world against COVID-19 had sputtered. “It became pretty clear by December that the hope that we would all as a global community buy vaccines together through COVAX was not being adhered to, particularly by the rich and powerful nations,” he said.

COVAX aimed to provide 20% of Africa’s vaccine needs, with African nations stepping up for the rest, he said. But “it really doesn’t matter how much money your country has, they couldn’t buy vaccines … I never saw presidents try so hard, calling chief executives.”

The African continent has relied on vaccine manufacturing capabilities elsewhere in the world, but the COVID-19 vaccine crisis has jolted African leaders into pursuing their own production.

Step by step, Masiyiwa laid out the challenges: Vaccine suppliers require advance purchases, and the World Bank could only lend to countries once vaccines are available. African nations scrambled via the Africa Export-Import Bank, owned by member states, to come up with some $2 billion. African countries created a purchasing platform to improve their buying power.

But the vaccines have been hard to find as countries with manufacturing capabilities imposed controls on export sales in the interest of vaccinating their own citizens first. “It was the same whether we were talking to the East, to the West, whatever,” Masiyiwa said. “This has created a massive crisis.”

He took aim at Europe: “When we go to talk to their manufacturers, they tell us they’re completely maxed out meeting the needs of Europe, we’re referred to India.” But the EU now imposes public health restrictions on people vaccinated with Covishield, the Indian-produced version of the EU-accepted AstraZeneca vaccine.

“So how do we get to the situation where they give money to COVAX, who go to India to purchase vaccines, and then they tell us those vaccines are not valid?” Masiyiwa said.

Without mentioning the EU issue, COVAX in a statement on Thursday warned against turning away people “protected by a subset of WHO-approved vaccines,” saying it would “effectively create a two-tier system, further widening the global vaccine divide.”

Some countries engage in so-called vaccine diplomacy and those bilateral donations are welcome, Masiyiwa said, but they’re not enough to “move the needle.”

FILE — In this Friday, June 25, 2021 file photo members of the Economic Freedom Fighters stage a protest march in Pretoria, South Africa, demanding that vaccines from China and Russia be included in the country’s vaccine rollout program. The African Union special envoy tasked with leading efforts to procure COVID-19 vaccines for the continent is blasting Europe as Africa struggles amid a crushing third wave of infections. (AP Photo Alet Pretorius, File)