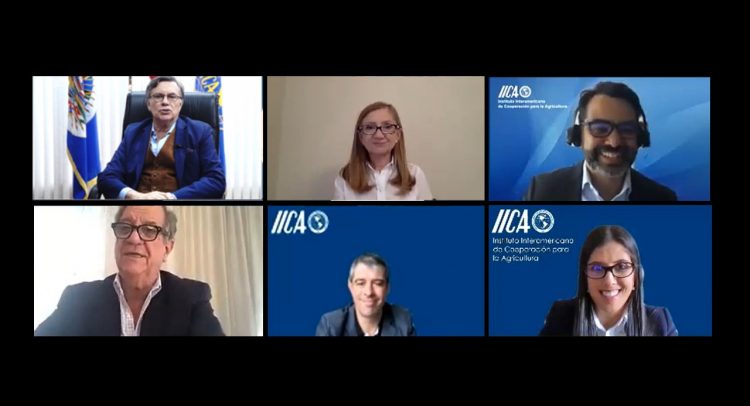 Agricultural Trade: A key engine to drive the economies of Latin America impacted by the pandemic

San Jose, 11 June 2021 (IICA). Within the framework of an already established joint work plan, the Inter-American Institute for Cooperation on Agriculture (IICA) and the Latin American Integration Association (ALADI) prepared a reference document with relevant information for designing, implementing, and financing a project to promote regulatory convergence in the agrifood sector across the countries of Mercosur and the Pacific Alliance, supported by both institutions.

The document was prepared by IICA, through Anabel González, former Minister of Foreign Trade of Costa Rica and recently appointed Deputy Director General of the World Trade Organization (WTO), and, in collaboration with ALADI, will identify the next steps to move forward with the initiative.

“Latin America has taken a hit from the pandemic; there are many consequences and the countries in the region will need to find new drivers of growth. Agrifood trade is one of those drivers”, said Anabel González, when presenting the document.

“The potential for the agrifood sector to contribute to the region’s economic reactivation is significant provided that we reduce the regulatory red tape affecting trade and production linkages, which are relatively limited. We believe that regulatory cooperation between Mercosur and the Pacific Alliance could support the expansion of intraregional agrifood trade, food security, the development of value chains, and the participation of small and medium producers and trade companies that are always the most impacted by regulatory divergence, as well as contribute to strengthening exports outside the region”, added the specialist.

Daniel Rodríguez, Manager of IICA’s International Trade and Regional Integration Program, specified that “identifying criteria that enable us to prioritize actions not only in terms of value chains and products, but also types of measures, is really important. This is a stage-by-stage process and we’ll need to move forward slowly, gradually adding individual sectors and countries”.

To that end, the Montevideo Treaty of 1980 offers a wealth of opportunities for progress in the area of regulatory cooperation across ALADI member countries, based on the principles of progressive convergence and multiplicity in trade instrument negotiations. Its Partial Scope Agreements can cover a number of topics, including agricultural trade, health, technical regulations, etc., and are an appropriate tool for a stage-by-stage process, through the progressive multilateralization of its results.

At the presentation of the document, it was emphasized that maintaining the high costs of regulatory divergence impacts and harms small and medium-scale producers the most, who find themselves unable to participate in trade insofar as larger scale producers have mechanisms to access information. It is believed that this project could be supported by the private sector, in order to focus on certain areas that require tangible, relevant, and swift results.

Both IICA, represented by its Director General, Manuel Otero, and ALADI, represented by its Secretary General, Sergio Abreu, underscored the important role of international cooperation in helping to reduce existing trade barriers and to unify efforts to promote trade opportunities in the region, generating more trade, knowledge, and regional integration.

To that end, also discussed was the possible contribution of technical cooperation to the process of convergence, including informal information exchanges, international harmonization and standardization, mutual recognition agreements, regulatory equivalence determinations, and the promotion of good practices and principles.

One of the objectives of the first phase, indicated González, is to define the cooperation priorities and the trade-related criteria.

The analysis will start by creating a community of regulators to exchange experiences, develop work plans, formalize cooperation, and build regulatory reform networks in the region, based on international good practices.

According to the analyses presented in the document, the countries of Mercosur and the Pacific Alliance have experienced a reduction in agricultural trade and limited production chains.

A study of total trade (exports plus imports) across and within both trade blocs revealed the predominance of industrial products: in 2019, agricultural products represented only 25% of total intra-Mercosur trade, approximately 20% of trade between Mercosur and the Pacific Alliance, and 14% of intra-Alliance trade.