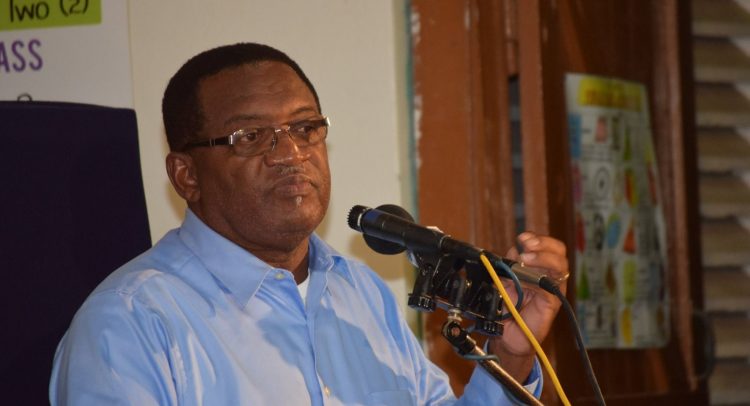 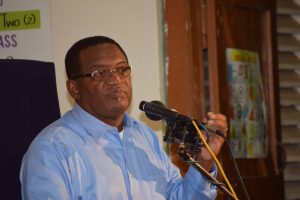 The Honourable Eugene Hamilton, Minister of Agriculture, at the “People’s Forum” Team Unity Town Hall Meeting at the Joshua Obadiah Primary School in Molineux on February 27, highlighted notable improvements in the agricultural  sector since the Team Unity Administration took office.

“The most progressive growth in agriculture has come in this three-year term under Unity because it has the full support of the entire government,” said Minister Hamilton.

He noted that the Ministry of Agriculture worked closely with the IT Department to set up an online portal for farmers to sell their products to a wider market right from their homes. He explained that this has helped farmers immensely with getting surplus stock sold.

“You can now go on the government website. Any of you who are farmers can now go online and build your own store with the products that you have in your house and on your farm and you can put what products you have and at what prices,” he stated.

The Ministry of Agriculture has also seen increases in crop production over the past three years despite a slight decrease in the production of meat, said Minister Hamilton. He explained that the government will be working diligently to address the issues with the reduction of meat by importing livestock from the US that will help to produce a better quality of goat meat than what is presently being produced on the island.

“This will help us to reduce the level of imports of mutton. We will start with goat and then go to others. This is important because we know that near 95 percent of mutton is imported,” he added.

In support of more local produce consumption, Minister Hamilton said that the Capisterre Farm will now be available to farmers for lot purchases that they can use to grow specific crops that are in demand for sale locally as well as for sale to restaurants and hotels.

“We are encouraging serious farmers to take a portion of that farm and grow specific crops,” said the minister, and he noted that so far there are three farmers who are utilizing the Capisterre Farm. He also stated that cassava will be one of the main crops produced at the farm.

Minister Hamilton lauded the government for its proactive response to farmers after the 2017 hurricane season where multiple farms were left devastated by Hurricane’s Irma and Maria.

“With the support of the Ministry of Finance, we immediately instituted a mechanism to give support to those farmers,” he said, while adding that at least 25 farmers from Constituency #7 were assisted by the hurricane relief fund.