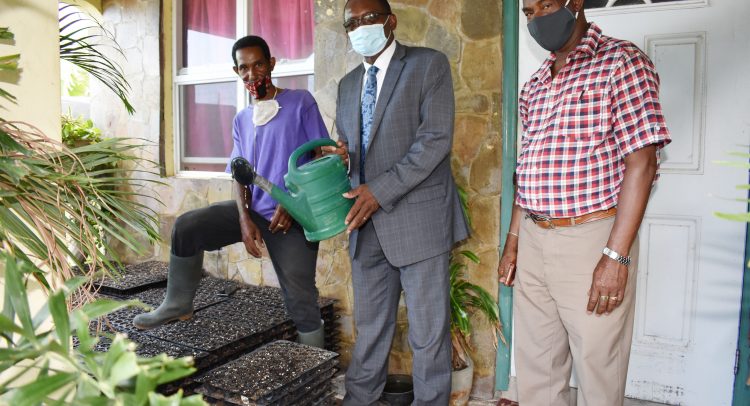 With food security as its number one priority, the Ministry of Agriculture has shifted gears after receiving $10 million out of the $120 million economic stimulus package that was announced by Prime Minister Dr the Hon Timothy Harris on March 24.

“I look forward to a greater production in 2020,” said the Minister of Agriculture, et al, the Hon Eugene Hamilton during a visit to a food crop nursery in Shadwell earlier this week. “The Ministry of Agriculture promises to make sure that none of the food perishes unnecessarily – if we have to purchase all and store it that is what we will do. If we have to purchase it and give it away, that is what we will do.”

The nursery, Epic Agri Fusion, is owned by Skills Training Empowerment Training (STEP) sponsored farmer Mr Ian Chapman who is one of the two nursery operators that have been contracted by the Ministry of Agriculture to produce seedlings for free distribution to general farmers and backyard gardeners as part of the economic stimulus package.

“In 2019, agriculture was responsible for producing 404 metric tons more food than was done in 2018, which means that there has been a significant increase in production in 2019,” said Minister Hamilton, who was accompanied by the Permanent Secretary in the Ministry of Agriculture Mr Alistair Edwards, and Director of Agriculture Mr Melvin James.

The Minister observed that even as the country is now going through a period of drought coupled with the Covid-19 pandemic that would have seen farmers lose valuable time because of restrictions, the Ministry is working tirelessly to ensure the country has food not only for consumption but for export to the neighbouring countries.

“This is a project the government has put $120 million stimulus package of which $10 million has been earmarked for agriculture,” said the Hon Hamilton. “Let’s hope that agriculture production for 2020 will be on par with 2019 or even greater.”

According to the Hon Hamilton, the Department of Agriculture is producing seedlings from its three nurseries, and has contracted Mr Ian Chapman, and Mr Nigel Walters to produce seedlings to be able to support the demand from householders who are doing backyard farming, and those who are religiously in agriculture every day of the week.

That will ensure the farmers are able to plant and to produce more food in the unlikely event there is a disruption in the food importation over the next few months, hence guaranteeing the country can feed itself and if there is a surplus to export some.

“So I want to thank Ian Chapman and Nigel Walters who are engaged in producing the slips, and let me take the opportunity to encourage all those who are prospective farmers and backyard farmers,” said the Minister of Agriculture.