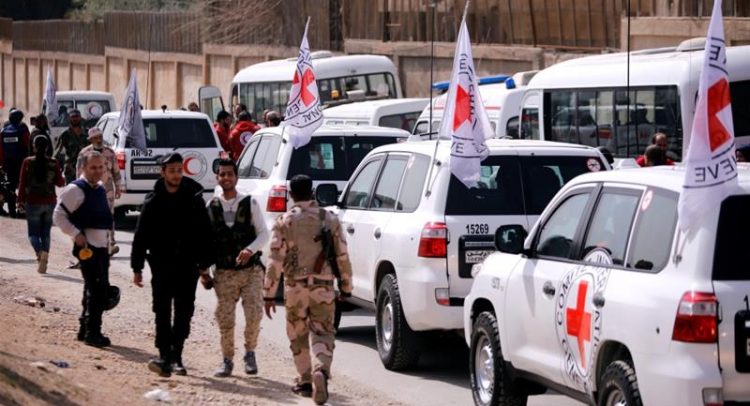 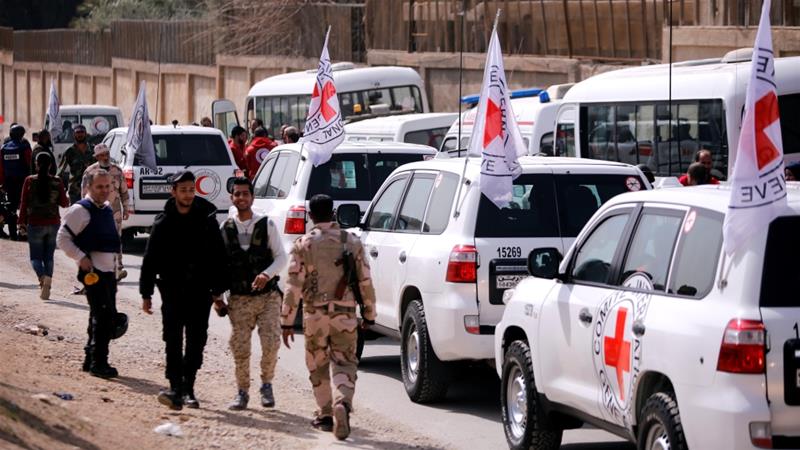 A 46-truck convoy carrying humanitarian aid has begun entering Eastern Ghouta through the government-controlled Wafideen checkpoint for the first time in nearly a month.

“At last … A convoy … carrying desperately-needed aid for tens of thousands is on its way to Eastern Ghouta, Syria,” Robert Mardini, the head of the Middle East operations for the International Committee of the Red Cross, said in a  tweet on Monday.

The convoy includes surgical and medical items, as well as 5,500 food and flour bags enough for 27,500 people, a spokeswoman from the ICRC said.

Ali al-Za’tari, a senior United Nations official with the convoy, told Reuters news agency that it would take “many hours” to offload the aid in the rebel-held enclave and that it might be “well after nightfall” before it could leave Eastern Ghouta.

More than 700 civilians have been killed during an aerial offensive that began on February 18. The area, home to 400,000 people, has been under siege by the government ever since armed opposition groups took control in mid-2013.

A 30-day ceasefire unanimously voted for by the members of the United Nations Security Council on February 24 has largely failed to hold.

Residents of Eastern Ghouta, which lies to the east of Damascus and was known as the breadbasket of the capital, have previously voiced their scepticism of a Russian-proposed “five-hour daily humanitarian pause” that began last Tuesday.

These pauses would supposedly create “humanitarian corridors” to allow the evacuation of those seeking medical treatment and the entry of aid convoys, but air strikes have continued to target civilians and residential areas.

“The terrorist groups in Ghouta are still preventing civilians from leaving, even with ambulances and transport buses waiting on the other side of the safe corridors,” Sana said.

Meanwhile, a human rights monitor said that Syrian troops and pro-government allies have advanced further into Eastern Ghouta, retaking control of a third of the region’s area.

The monitor’s director, Rami Abdel Rahman, said that the speed with which government forces are moving into the rebel-held enclave is due to the fact that these “operations so far are mostly conducted in farmland”.

The Syrian government said that it has recaptured control of 36 percent of Eastern Ghouta.

The country’s Central Military Media said that troops are continuing their advance from the east and are only three kilometres from meeting troops advancing from the west, laying the ground for the dividing eastern Ghouta into two parts.

Yet local journalists in the area said that the territories captured were less than one quarter.

“Battles between the rebels and the pro-government troops are still being fought in a hit and run manner,” one journalist in Douma told Al Jazeera, adding that control of some of the territories are quick-changing.

In a press conference on Sunday, Syrian President Bashar al-Assad said that the Syrian army is attacking Eastern Ghouta “to restore stability and defend the people who are confronting terrorists”.

Jaish al-Islam, one of the armed opposition groups in Eastern Ghouta, said the government’s “scorched earth policy” had forced rebels to retreat and regroup, but vowed to recover lost territory.

The group’s spokesperson Hamza Bairakdar said that Jaish al-Islam had already begun offensive and that “hundreds of soldiers from the Syrian Army” have been killed in the last two weeks.