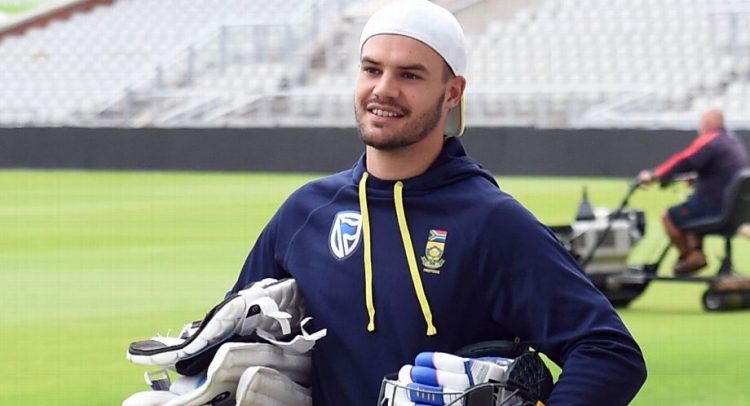 Aiden Markram has made his ambitions to take over as South Africa’s Test captain known but has caveated it by insisting that he was not hell-bent on being appointed.

“I really enjoy captaincy. I enjoy the responsibilities that come with it. I would give an absolute arm and a leg to be able to do it, but I have said it before in the same breath, it’s the not the be-all and end-all so I don’t want to become desperate about it,” Markram said on Monday.

Markram has been considered one of the leading candidates to replace Faf du Plessis, who stood down in January, following his success in leading South Africa’s Under-19 team to World Cup glory in 2014. But, despite a stellar start to his Test career with two hundreds in this first three matches, Markram spent most of the 2019-20 season sidelined with injury and understands the need to cement his place in the team before he can be seriously considered to lead it.

“I thoroughly enjoy captaining and would be honoured if it were the case, but I don’t want to look too much into it,” he said. “If it were to happen, it would be amazing. But if not, there are plenty good leaders within the environment that will take the team forward along with the management. My main focus is trying to get back into the side and stay on the field.”

Markram broke his hand during South Africa’s tour of India in October last year when he “lashed out a solid object”, as CSA put it, after bagging a pair in the Pune Test. He missed the third Test in Ranchi but healed in time for the Boxing Day Test against England at home. There, he broke a finger in the field and sat out the rest of the series. After that, Markram played in six List A games in March, and scored two hundreds. He now feels he is “at 100%”, having completely recovered from the two fractures and the uncertainties over his own ability.

“I doubted myself quite a bit this last year, since it was quite a struggle for me. It’s a tough space to be in but it comes with the territory and if you want to be a top performer at a high level, you’ve got to find ways to deal with it”

Even before Markram was injured, he hit a lean patch and has not scored a Test century since March 2018 or a half-century in his last seven innings. “I have certainly doubted myself and doubted my abilities,” he said. “At the top level, you’re just a few bad knocks away from people wanting you out of the team. I doubted myself quite a bit this last year, since it was quite a struggle for me. It’s a tough space to be in but it comes with the territory and if you want to be a top performer at a high level, you’ve got to find ways to deal with it.”

Importantly, Markram had to find ways to take his mind off things like his approach to spin, a rabbithole he could easily have got lost in. “The most challenging part of being injured is not letting your mind run off. When you’ve got so much time on your hands to tend to, not just overthink things but you delve deep into things which is often quite unnecessary,” he said. “I think trying to keep your mind at bay and trying to keep your mind calm and strong when you have time is probably the biggest challenge that I struggled with.”

Returning to his domestic franchise, the Titans, also helped as Markram felt welcomed by a familiar environment and had the time to work on a few technical aspects of his game. “The Titans are a team I really, really love playing for. The happiness we feel off the field allows us to naturally just express ourselves without stressing about backing or form,” he said. “And then there were a few small technical things that I identified and the bit of cricket I did play for the Titans after my injury left a bit better.”

Whether Markram has worked out when to play for turn and when to watch for the straighter one – an issue that plagued him against Rangana Herath in the main – remains to be seen.

With all cricket activity in South Africa suspended since mid-March, the national team’s white-ball tour to Sri Lanka postponed and their July-August series in West Indies in doubt, it is not yet known when Markram, or any of his team-mates, may be in action again. Instead, CSA is spending the time getting parts of their house in order, which has included appointing Graeme Smith as the permanent director of cricket. Among Smith’s most pressing tasks is deciding on the new Test captain, a position he has already ruled white-ball captain Quinton de Kock out of.

That may indicate Markram is in with a chance. Now 25 and with just 20 Test caps to his name, Markram is one of the younger and less experienced members of the current list of contracted players but has long been seen as a future leader. Apart from leading the Under-19s, Markram has captained in 21 matches across first-class, List A and international levels, including for South Africa A. Markram captained the ‘A’ side in England in 2017 and in India last year. He also led South Africa’s senior side in an ODI series against India in 2018, when du Plessis was injured. South Africa lost that series 5-1 and Markram’s form dipped, but since then, he has also had the opportunity to learn from other captains. “I’ve been able to watch other captains, from franchise captains through to a guy like Faf, and it’s just something I would love to do,” he said. “Having said that, I’ve never given captaining my country too much thought. It’s always been a shot in the dark for me but now that my name is in the hat, so to speak, it’s nice to be considered.”

Markram is thought to be up against Temba Bavuma, Rassie van der Dussen and Dean Elgar while Keshav Maharaj has also indicated his interest.

Photo: Aiden Markram is one of the contenders for the Test captaincy (Getty Images)