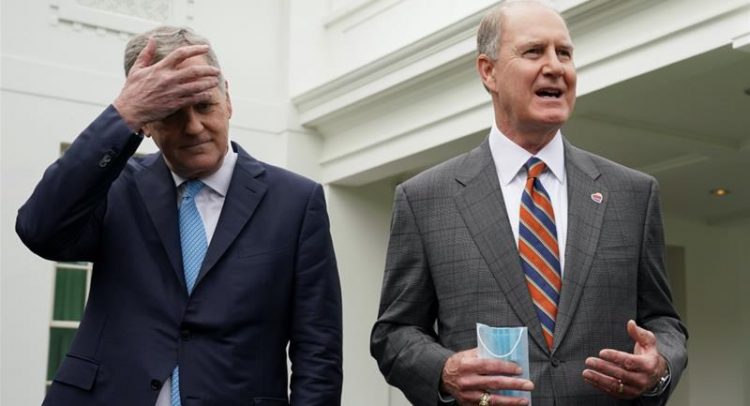 Meadows told reporters: “If (House) Speaker (Nancy) Pelosi was willing to move a bill to keep people from being laid off in the airline industry that’s stand-alone, that the president would certainly support it.”

But congressional aides say it is unlikely Congress would agree to a stand-alone bill to assist airlines when so many other sectors are struggling and seeking assistance.

“The needs have only grown. Some of the needs for the small businesses, needs for restaurants, needs for transportation and the rest,” Pelosi said on Thursday.

Meadows said the administration had examined executive action options, all of them less than ideal.

Airlines did not offer a new proposal but again made the case that helping avert airline job cuts was one good reason to pass a broad coronavirus relief bill.

After the meeting with Meadows, American Airlines Chief Executive Doug Parker said it was “not fair” that thousands of airline workers were about to be laid off.

“It’s not fair to them, it’s not fair to our country …We’re just here to plead with everyone involved to get to a COVID relief package before October 1,” Parker said.

He said there is “enormous bipartisan support” but there is no legislative vehicle yet to win approval.

Senator Maria Cantwell, a Democrat, said the payroll assistance should be extended. She urged legislators to “come back to the table” before the significant layoffs.

American has said it plans to end service to 15 small communities without additional government assistance and furlough about 19,000 workers.

At the end of this month, the $25bn in federal payroll assistance airlines received when the coronavirus first began spreading around the world is set to expire.

Congress also set aside another $25bn in government loans for airlines, but many have opted not to tap that funding source.

Companies such as American are now pleading for a six-month extension while they simultaneously negotiate with employees to minimize thousands of job cuts that are expected without another round of aid.

Air travel has plummeted over the last six months as the coronavirus pandemic has claimed nearly 196,000 American lives and prompted many to avoid airports and planes, seriously depressing airline revenues.

Barr under fire over comparison of virus lock-in to slavery