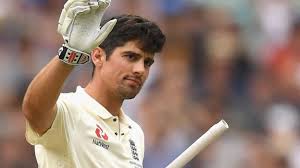 “There is nothing left in the tank,” said Cook, who captained his country in a record 59 Tests.

The fifth Test of the series, in which England have an unassailable 3-1 lead, starts on Friday at The Oval.

Cook is sixth on the all-time list of Test run-scorers and has made a record 11,627 runs as an opener.

He added: “I have achieved more than I could have ever imagined and feel very privileged to have played for such a long time alongside some of the greats of the English game.”

However, he has struggled this year, averaging 18.62 in 16 innings, and has not scored a fifty in the current series against India.

In a statement, Cook said his decision to retire from international cricket had come after “much thought and deliberation over the last few months”.

He added: “Although it is a sad day, I can do so with a big smile on my face knowing I have given everything.

“The thought of not sharing the dressing room, again, with some of my team-mates was the hardest part of my decision, but I know the timing is right.

“I have loved cricket my whole life, from playing in the garden as a child, and will never underestimate how special it is to pull on an England shirt.

“So I know it is the right time to give the next generation of young cricketers their turn to entertain us and feel the immense pride that comes with representing your country.”

Cook said he will continue playing county cricket and “can’t wait to get fully involved” with Essex in 2019.

From last-minute replacement to England legend
The left-hander made his Test debut at the age of 21, replacing Michael Vaughan against India at Nagpur in 2006, and hit an unbeaten century in the second innings.

He missed the third match of that series because of illness, but has made a record 158 consecutive Test appearances since.

Cook won four of the seven Ashes series in which he played, scoring 766 runs at an average of 127.66 in 2010-11 as England triumphed in Australia for the first time in 24 years.

Cook took over as captain from Andrew Strauss in 2012 and went on to win 24 of his Tests in charge. Only Vaughan has more with 26, although Cook lost a record 22 Tests as skipper.

In 2012, Cook led England to their first victory in India for 27 years.

Cook became the first Englishman to reach 10,000 Test runs in 2016, although England lost 4-0 in India that winter and he resigned as captain in February 2017.

While he hit 243 against West Indies at Edgbaston last summer, he went through another lean spell before making an unbeaten 244 against Australia in the Boxing Day Test, his fifth double century.

He has passed 50 once in 16 innings since then.

Cook formed a prodigious opening partnership with Strauss, scoring a combined 4,711 runs in 117 innings between 2006 and 2012 – the most by an England opening pair and third most for any country.

Following Strauss’ retirement in 2012, Cook has had 12 different opening partners.