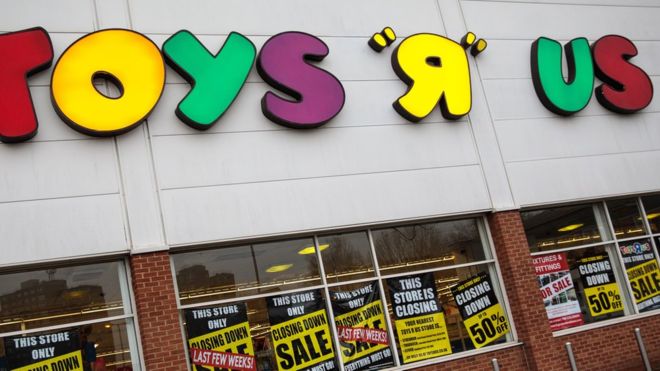 All Toys R Us stores to close their doors

All Toys R Us stores in the UK will close in the next six weeks following the chain’s collapse into administration.

Attempts to find a buyer for the US retailer’s 100 stores in the UK have failed.

Twenty five stores have either closed in recent days or are due to shut by Thursday.

The collapse will put more than 3,000 people out of work as a dismal period for the retail sector continues.

Administrators Moorfields were appointed last month to start winding down the UK’s biggest toy retailer after it struggled to pay a £15m tax bill.

Simon Thomas, joint administrator, said Moorfields’ efforts to find a buyer had not been successful.

“It is therefore with great regret that we have made the difficult decision to … proceed with a controlled store closure programme.”

The US parent company filed for bankruptcy in September and reports suggest it may start closing its 800 stores in the US as early as this week.

The business was bought in 2005 by a group of investors including private equity firms Bain Capital and KKR, which loaded it with some $5bn (£3.6bn) in debt. The company was crippled by interest payments which at times reached $400m a year.

In the UK Toys R Us joins a long list of high street retailers including Maplin and Claire’s that have run into difficulties this year.

Many have been hit by changes in consumer spending habits, a squeeze on disposable income, higher inflation and the national living wage, and the prospect next month of increases in business rates.