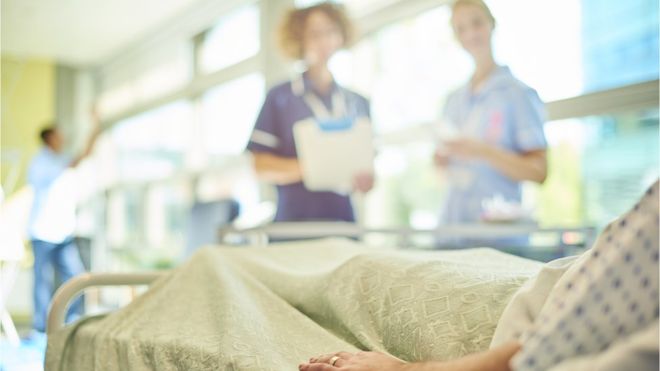 Amazon, JP Morgan and Berkshire Hathaway are joining forces to create a healthcare firm aimed at cutting costs for their US employees.

The independent firm would be “free from profit-making incentives and constraints”, the firms said.

They said their aim was to provide care to staff at a “reasonable cost”.

Nonetheless, the announcement sparked fears that tech giant Amazon could disrupt the healthcare sector in the same way that it has the retail sector.

The firms are the three largest private employers in the US, collectively employing over 500,000 staff.

The three companies said they would focus on technology to provide “simplified, high-quality and transparent healthcare”.

“Our people want transparency, knowledge and control when it comes to managing their healthcare,” said Jamie Dimon, chairman and chief executive of JPMorgan Chase.

“The three of our companies have extraordinary resources, and our goal is to create solutions that benefit our US employees, their families and, potentially, all Americans.”

Shares in US health insurers UnitedHealth, Anthem and Cigna Corp all fell over 5% in early trading following the announcement.

He’s the man who started with what was effectively a mail order bookshop with an email address and ended up building a vast machine that has transformed the world’s retail industry.

Along the way he has sparked a revolution in enterprise computing, putting thousands of organisations into the cloud, bought the Washington Post, and is trying to rival Elon Musk as a space entrepreneur.

No wonder Jeff Bezos thinks he can do anything, including the fearsome task of finding a middle way for American healthcare, which even Donald Trump has described as “so complicated”.

Just as with Mr Trump, many analysts have predicted over the years that Jeff Bezos and his various ventures are heading for failure or bankruptcy. B

ut the world’s richest man – well this month at least – has stuck by his own vision and charged ahead. Don’t expect him to give up on his audacious health plan in a hurry.

“Investors have continually asked what unexpected development might spoil the strong investor sentiment towards managed care.

Initially, the company’s formation will be headed by Todd Combs, an investment officer of Berkshire Hathaway; Marvelle Sullivan Berchtold, a managing director of JPMorgan Chase; and Beth Galetti, a senior vice president at Amazon.

Plans for a longer-term management team and how the company will operate have yet to be decided.

“The healthcare system is complex, and we enter into this challenge open-eyed about the degree of difficulty,” said Amazon founder and chief executive Jeff Bezos.

“Hard as it might be, reducing healthcare’s burden on the economy while improving outcomes for employees and their families would be worth the effort.

“Success is going to require talented experts, a beginner’s mind, and a long-term orientation.”

The US Congressional Budget Office (CBO) has forecast that the cost of a medical insurance policy would increase by 25% in 2018 and double by 2026.

Bruno Mars grabs (nearly) all the Grammys - but where were the women?