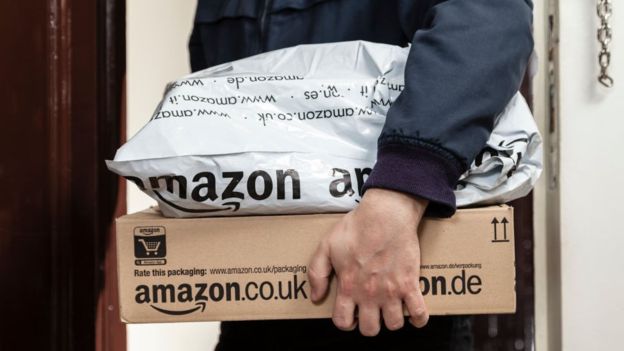 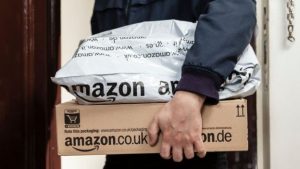 Amazon UK Services bill was £4.6m, down from £7.4m a year ago, accounts show. But the division, which operates the warehouse “fulfilment centres”, was able to defer £2.9m.

It meant that the company has paid £1.7m in tax for now, even though pre-tax profits jumped from £24.3m to £72.3m. Amazon said it paid all the taxes required by UK law. One reason for the lower tax bill was a rise in share-based payments for staff.

Amazon said that full-time warehouse staff on average have received shares worth more than £1,000 a year.

As Amazon’s share price has risen so sharply, these are often worth more when they are sold to the open stock market. That sale price is the one on which the tax bill, for both the company and the individual, is based.

Amazon UK Services, the division that runs the warehouses that process, package and post deliveries to UK customers, paid out £54.8m in share awards, compared with £36.7m in 2016. Turnover was £1.98bn, up from £1.43m. It employs more than two-thirds of the 27,000-strong UK workforce.

n Amazon UK Services spokesman said it paid all the tax it was required to “in the UK and every country where we operate”.

“Corporation tax is based on profits, not revenues, and our profits have remained low given retail is a highly competitive, low-margin business and our continued heavy investment.” It was a similar picture at another of Amazon’s UK businesses.

Amazon Web Services UK’s accounts, also filed this week, showed taxes fell to £155,000 from £404,000, but profits were up from £2.7m to £5m. Amazon Web Services, which provides cloud computing storage for a range of high-profile clients, including the UK’s tax collector, HMRC, gave share awards to staff of £11.8m, compared with £5.8m in 2016.

While the numbers are big, this set of accounts gives only a glimpse of the true state of Amazon’s tax affairs. Amazon Services UK runs customer service and warehouses in the UK – actual retail sales are routed through a different company.

Turnover was just under £2bn, operating profits nearly tripled to just under £80m, but the company was able to reduce its tax liability by deducting part of the payments it makes to staff in the form of company shares. Any company can do this – it is not an Amazon-specific tactic. It then deferred some of the tax, and ended up paying just £1.7m.

This will be a bitter pill for High Street retailers, which are struggling to survive under an exodus of shoppers to online yet are unable to minimise their tax burden so easily. They also claim their physical location means they carry an extra burden of high business rates.

It is also a spur to the Treasury and HMRC, which has often talked tough on tax reform but has not been able to level the playing field between High Street and online players. The long-talked about shift away from corporation tax – which taxes company profits – to an activity tax, which would capture tax on sales wherever they are made – seems no closer.

Earlier this week, Amazon reported record quarterly profits of $2.53bn (£1.9bn) worldwide for the three months to 30 June. The profit was about 12 times more than Jeff Bezos’s company made during the same period last year.

Amazon reports its revenues from UK sales through a separate company based in Luxembourg.

Rebecca McVittie, investment director at Fidelity International, told the BBC’s Today programme it was “indicative of how tax policy hasn’t moved on”.

“The world has evolved very quickly, technology giants have this hugely dominant role and popular role with consumers and in many respects, what we see in the headlines today, I think there should be more reflection on the need for digital taxation.”

HMRC said in a statement: “We do not comment on identifiable taxpayers. “We subject large businesses to an exceptional level of scrutiny. We actively investigate more than half of the UK’s largest businesses at any one time. This does not imply wrongdoing, it’s a reflection of how complicated their tax affairs can be and how determined we are to ensure they are paying all the tax they owe.”

Shadow business secretary Rebecca Long Bailey said Labour would act firmly on tax, if it got into power.

“Our High Streets are falling to their knees as a result of lacklustre public investment, crippling business rates and no support or strategy from this government – while at the same time they let corporations like Amazon get away with paying so little in tax,” she said.

“The next Labour government will crack down on tax dodging by the super-rich and big corporations under our Tax Transparency and Enforcement Programme.”