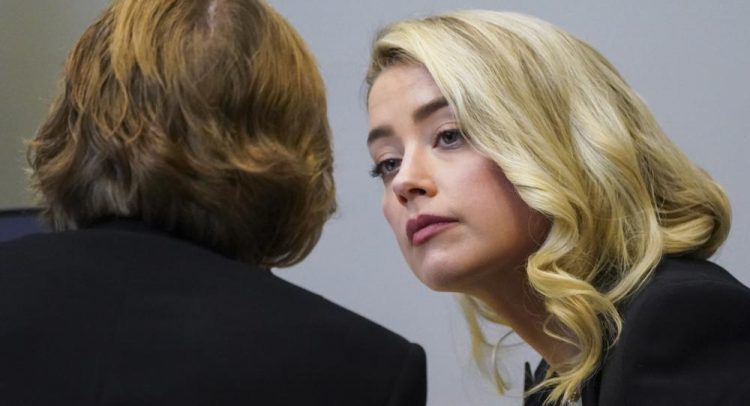 FALLS CHURCH, Va. (AP) — A friend of actor Amber Heard testified Wednesday that she saw the bruises and cuts left in the aftermath of multiple incidents of abuse inflicted by Heard’s ex-husband, Johnny Depp.

In a recorded deposition played for jurors, Raquel Pennington said she never personally witnessed Depp strike Heard. But she said she saw the injuries, and she took photos of Heard’s face in December 2015 after a fight in which Heard says Depp head-butted her and perhaps broke her nose.

She also took a photo of strands of hair that she said were ripped from Heard’s scalp.

Heard “often had to cover bruises and injuries on her face” with makeup, Pennington said in the January 2022 deposition.

Pennington said she doesn’t really consider herself a current friend of Heard, and that the two grew apart in the last year.

Depp is suing Heard for libel in Virginia’s Fairfax County Circuit Court over a December 2018 op-ed she wrote in The Washington Post describing herself as “a public figure representing domestic abuse.” His lawyers say he was defamed by the article even though it never mentioned his name. The trial is now in its fifth week.

Depp says he never struck Heard and that he was the victim of abuse inflicted by Heard.

The December 2015 fight is one of several that were disputed. While jurors have seen the photos taken by Pennington documenting the injuries, they have also seen video of Heard’s appearance on a late-night talk show the next day in which those injuries aren’t visible.

Heard has said the injuries were just covered by makeup.

Pennington’s testimony comes after Heard wrapped up her time on the witness stand, including two grueling days of cross-examination in which Depp’s lawyers questioned Heard about the truthfulness of her allegations of physical and sexual abuse.

Pennington’s testimony provides corroborating evidence to several of the alleged assaults. In addition to the December 2015 incident, Pennington said she saw cuts on Heard’s feet when she returned from a trip to Australia in March 2015. Heard testified that Depp sexually assaulted Heard with a liquor bottle on that trip and that she cut her feet on broken glass from the attack.

And Pennington, who lived for a time in a suite of penthouses along with Depp and Heard, said she was the first person to see Heard during a final fight between the couple in May 2016 that precipitated the couple’s divorce.

Actor Amber Heard talks with her lawyer Elaine Bredehoft in the courtroom at the Fairfax County Circuit Courthouse in Fairfax, Va., Wednesday, May 18, 2022. Actor Johnny Depp sued his ex-wife Amber Heard for libel in Fairfax County Circuit Court after she wrote an op-ed piece in The Washington Post in 2018 referring to herself as a “public figure representing domestic abuse.” (Kevin Lamarque/Pool Photo via AP)

2022 is the year of all-inclusive travel, and here’s why