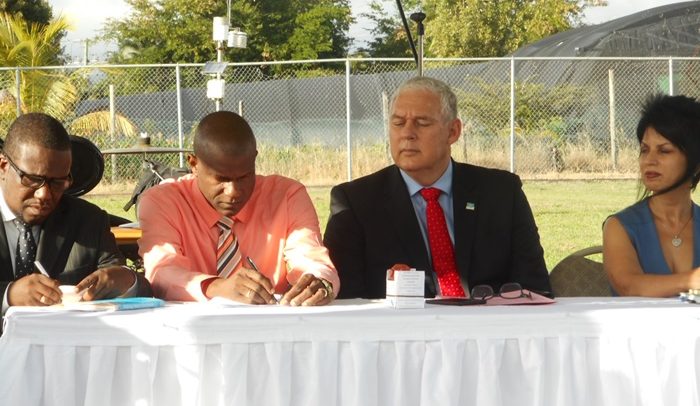 Ambitious agricultural project launched for farmers and fisherfolks of the south 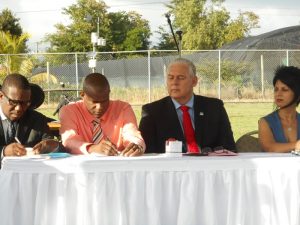 The Laborie Co-operative Credit Union Ltd. (LCCU) earlier this week launched an ambitious agricultural project aimed at strengthening agribusiness operation for its members within the context of climate change.

The project, Sustainable Agribusiness for Laborie and Environs (SABLE) which cost US$1.856 million, is funded by the Inter-American Development Bank (IDB), supported by the Government of St. Lucia, and being executed by the Laborie Co-operative Credit Union, for the benefit of farmers and fisherfolks of the south.

The project was officially launched at the Black Bay Consumers Co-operative Society Ltd. in Augier, Vieux-Fort.

The momentous occasion was graced with the presence of a number of government officials, including Prime Minister Allen Chastanet and Minister for Economic Development Guy Joseph, and representatives of organisations in the agricultural sector.

In his address, President of the LCCU Steven Auguste said: “The project is innovative as it will deliver financial support for the adoption of climate resilient practices and improve livelihoods for our members. In addition, the project explicitly connects market opportunities, investment capital, capacity building and technical support.”

He said this is done via a blended financial intervention to support greater climate resilience, environmental and commercial sustainability of small agro production, and fishing in the south.

According to Auguste, under this project, the LCCU functions as a trusted, credible change agent, as well as financier in the transition of the region’s agricultural and fishing communities.

“The LCCU is extremely well positioned to facilitate and support the successful implementation of the proposed intervention in climate change adaptation of farmers and fisherfolks,” Auguste said.

General Manager of LCCU Lucius Ellevic said fisherfolks and farmers are not doing well because the systems and methods which are supposed to help them sell and generate revenue from their production have failed them.

“Thus is the salient area in which this project will address itself…” Ellevic said.

He said under this project, farmers and fisherfolks will be in a better position to reap the benefits of their labour.

“It is the intention of government to ensure that there is a clear market space for fresh fruits as well agro processing…That is why the development of the south is so critical,” the prime minister said.

He said there are projects such as hotels which will soon commence in the south that will create opportunities for farmers.

“What is taking place here is timely…I am appealing to farmers to make use of the opportunities we have provided under this project,” Prime Minister Chastanet said.

He said he is sometimes frustrated when he hears people say it’s either agriculture or tourism.

Multilateral Investment Fund (MIF) senior specialist, Vashtic Dookiesingh, commended the LCCU for embarking on such an important project and called on the farmers to make full use of the opportunity it will provide them.