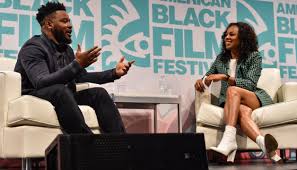 The 22nd annual American Black Film Festival is a wrap. Aside from putting together the annual showcase of Black film and TV talent, founder Jeff Friday’s festival can now boast of jump-starting the career of the most successful Black movie director in history.

Director Ryan Coogler – you may have heard of the little movie he directed – Black Panther – launched his career at the 2011 festival by winning the HBO short film competition. This year, he returned to ABFF to give other aspiring filmmakers a sense of hope by sharing the trajectory of his success in the time since.

Other highlights were the premiere of Superfly and of the second, family-approved Whitney Houston doc, Whitney, a partial screening of the upcoming Bobby Brown BET movie with Bobby in attendance and the world premiere of The First Purge, the prequel to the successful franchise that already boasts the original movie and a sequel.

Here’s our look at the festival highlights this year:

It’s hard to call the Whitney documentary a triumph. Directed by acclaimed Scottish filmmaker Kevin MacDonald, who also did the Marley documentary, it’s a searing portrait of Houston’s tragic downfall. It had the full cooperation of Houston’s family, many of whom damn themselves as enablers, co-dependents and other less charitable descriptions as they detail how they directly contributed to her eventual demise.

Here’s our look at the festival highlights this year:

Some viewers were bawling by the end which is understandable as it’s an unflinching look at how fame and its attendant temptations can destroy both the famous and those around them. Actor Kofi Siriboe of Queen Sugar echoed the struggles that come with losing your anonymity is his panel “Hot In Hollywood’ which included Bresha Webb, Logan Browning and Ashley Featherstone. Siriboe said at the height of his star turn as Ralph Angel, that he became depressed and wanted desperately to return to his pre-QS life.