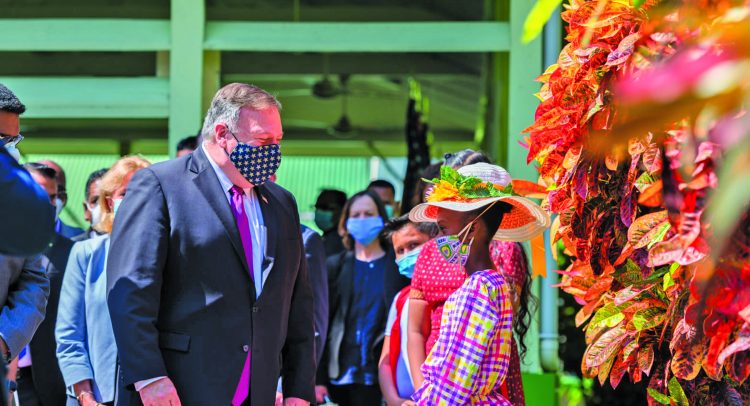 The historic visit by United States Secretary of State, Mike Pompeo is a testament to the deep value that country places on its relationship with Guyana, US Ambassador Sarah-Ann Lynch said on Tuesday.

Pompeo was in Guyana on an official visit on Thursday and Friday last. He is the highest-ranking US official to ever travel to Guyana while in office.

Ambassador Lynch expressed her gratitude to the Guyanese people for hosting Pompeo and noted that his visit was not just significant because Guyana was on the cusp of transformational development. It was also significant because the Secretary of State reaffirmed that when the US showed up, it made good on its commitments.

“Over the past year, Secretary Pompeo spoke numerous times about the importance of the US-Guyanese diplomatic relationship and the need for Guyana to uphold the principles of democracy and good governance while advancing improved security and prosperity. And, his visit showed that his words are backed by action,” she said.

The Ambassador reminded of the three important agreements signed during Secretary Pompeo’s visit. Lynch added that Guyanese should expect more of such visits by other high-ranking US Government officials as well as businesses since the country was committed to the partnership with Guyana.

The visit of Secretary of State, Mike Pompeo stands as proof of how deeply the United States values Guyana and its people – all of its people – and how we look forward to an even stronger partnership as the country moves forward,” Lynch noted.

During Secretary Pompeo’s visit, the Guyana and US Governments signed a Framework Agreement to strengthen cooperation in various sectors, including energy and infrastructure, under the umbrella of the Growth in the Americas Initiative.

Under the agreement, which was signed by Secretary Pompeo and Foreign Affairs and International Cooperation Minister Hugh Todd at State House on Friday morning, the countries will work together to strengthen trade and investment, cooperate on building infrastructure, and build Guyana’s necessary energy and information technology sectors. Guyana is the second Caribbean nation to join the Initiative.

Additionally, a security pact was agreed that enables US and Guyanese law enforcement to embark on joint patrols to stop the movement of illegal drugs, and a commitment was made to US$4.5 million of new United States Agency for International Development (USAID) assistance for youth and citizen engagement programmes .

During a joint press conference with President Irfaan Ali on Friday, Pompeo also announced that his country’s Government was committing US$5 million to assist Venezuelans who have fled to Guyana as a result of the ongoing humanitarian crisis in our South American neighbour.

“The United States has now allocated $5 million to help Venezuelans in Guyana who have had to flee from Venezuela to Guyana to escape the horrors and brutality of the Maduro regime. I trust that that cooperation will continue and I want to express my personal appreciation for Guyana’s hosting the Venezuelans that have crossed inside of your country,” Pompeo had said.

When asked, in a subsequent interview, to respond to suggestions that his visit was intended to antagonise the Nicolás Maduro Administration, Pompeo explained that he was sent to Guyana to talk about all the opportunities there are for the United States to invest and help build out better lives for the people of Guyana.

He further added that was what was also wanted for the Venezuelans.

Under the maritime patrol pact with the United States to guard against narcotics and other regional security threats, US and Guyanese security forces will monitor maritime movements.

The signing of this pact for maritime patrol comes on the heels of increasing cross-border attacks from Venezuela in riverine areas.

Only recently, several officers attached to the Guyana Geology and Mines Commission (GGMC) came under fire while conducting inspections along the Cuyuni River. It is suspected that the shots were fired by the notorious “syndicato” gang from Venezuela.(G2)