Amory Sworn in as Premier

The ritual to install Mr. Amory was held on Wednesday afternoon, 23rd January, 2013, during a short but important ceremony at the High court in Charlestown, the capital of Nevis.

In front of family members, party officials and a few supporters, Mr. Amory took the Oaths of Secrecy and Allegiance as administered by the resident High Court Judge, Justice John Benjamin.

Also present was the Deputy Governor General for St. Kitts & Nevis, His Honour Mr. Eustace John and Mrs. Amory, wife of the Premier.

Premier Amory has also advised that a public ceremony is being planned for this Saturday 25th January, (most likely at the Elquemedo Willett Park), when all members of the Nevis Island Administration Cabinet will be sworn-in and their portfolios announced.

Mr. Amory has already hinted however that Mr. Mark Brantley will be appointed his Deputy Premier. Brantley ran against and defeated the last Deputy Premier, of the Administration of the NRP, Mr. Hensley Daniel, who interestingly was Brantley’s teacher during his high school days. 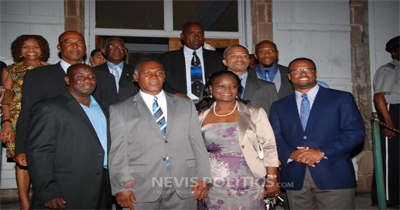 The other successful candidate for the CCM in the recent election was Mr. Alexis Jeffers.

This will be the fourth time that Amory will be serving as Premier, having led the CCM Administration of 1992-2006, when his party dislodged the long serving island government of the late Premier, Dr. Simeon Daniel, which held office from 1980 to 1992. Both the new Premier, Vance Amory and the man he defeated on Tuesday, Mr. Joseph Parry, served as Permanent Secretaries for many years, in the former Daniel government.

Amory however left his government post to eventually establish his own political party, gaining success at the polls in the early 1990s.