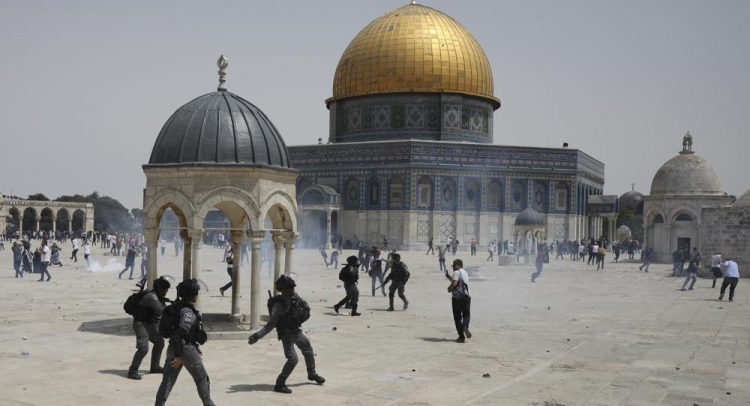 JERUSALEM (AP) — Over the past weeks, as stun grenades echoed off Jerusalem’s walls, rockets streaked out of Gaza, West Bank protesters burned tires and Israeli cities erupted in violence, the frail boundaries separating Israel and the Palestinians seemed to vanish in smoke and flames.

Israelis saw the chaos ripple out of Jerusalem, not only igniting another Gaza war, but days of ethnic violence in mixed cities they had long held up as models of coexistence, bringing the conflict home in ways unseen since the 2000 Palestinian uprising.

But Palestinians, whether in blockaded Gaza, the occupied West Bank, annexed east Jerusalem or Israel itself made a striking show of unity after decades of forced separation. And the porous frontiers between Israel and the lands it occupied in 1967 — so central to decades of failed peace efforts — seemed to disappear.

On Tuesday, Palestinians from the Mediterranean Sea to the Jordan River observed a general strike, not only against the Gaza war but other aspects of Israeli rule. Protesters from Lebanon and Jordan, both home to large numbers of Palestinian refugees, stormed border fences.

“It highlighted the common destiny,” said Nijmeh Ali, a Palestinian academic and activist who is a citizen of Israel. “Palestinians are leading their struggle against one regime. It’s using different policies of control, but it’s the same apartheid system.”

There’s always been a certain degree of solidarity among Palestinians, she said, but a new generation is coordinating activities online and sharing videos from across Israel and the occupied territories, further binding them together in a shared struggle.

Israel’s leaders blame the unrest on Hamas, which does not recognize Israel’s right to exist and is branded a terrorist group by Western countries. They say the Islamic militants seized on protests in Jerusalem to incite war and unrest across the region.

“It’s a great success for Hamas, but I’m not sure that it has to do with the popularity of Hamas,” said Ofer Shelah, a former parliament member from a centrist party. “Something like this, when it happens, it ignites fumes that have already been there.”

Still, he said grievances within Israel’s Arab community and the conflict with the Palestinians are “two different stories.” He noted that before the fighting broke out a small Arab party was poised to play a key role in forming the next Israeli government.

Over the years, Palestinian citizens of Israel, while facing discrimination in many aspects of their lives, have also made inroads in others, building successful careers in law, academia, entertainment and medicine.

The peace process launched in the early 1990s was based on the idea that a century-old territorial dispute between Jews and Arabs could be resolved by dividing the land along the armistice lines from the 1948 war surrounding Israel’s creation. The state of Palestine would include most of east Jerusalem, the West Bank, and the Gaza Strip, lands Israel captured in a later war, in 1967.

But even with the cajoling of five U.S. presidents and much of the international community, the two sides were never able to reach an agreement or resolve the power imbalance favoring Israel. The last substantive talks broke down more than a decade ago.

And lines which were always arbitrary faded away.

Jewish settlers — who never wanted to divide the land to begin with — pushed into east Jerusalem and the West Bank, and their supporters came to dominate Israeli politics. Today, there are more than 700,000 settlers in both territories, the vast majority living in built-up residential areas connected to Israeli cities by rapidly expanding highways.

The Palestinian Authority, once seen as a state-in-waiting, has only limited autonomy in scattered enclaves making up less than 40% of the occupied West Bank. Its close security ties with Israel, and its decision last month to cancel the first elections in 15 years, have led many Palestinians to view it as an extension of the occupation.

If the West Bank is looking more like Israel, the opposite is also true.

Palestinian citizens of Israel, who make up 20% of the population, face widespread discrimination, especially when it comes to land and housing. Israel has spent decades establishing new communities on lands seized in 1948 that are intended for Jewish “settlement” — a descriptor used by Israelis and Palestinians alike.

In recent years, Jews with close ties to the settler movement have moved into predominantly Arab neighborhoods, not only in east Jerusalem, where they are trying to evict dozens of Palestinian families, but in mixed cities across Israel. Palestinians have cited that as one of the underlying causes of the recent ethnic violence. The Jews say they have the right to live anywhere in their country.

When the riots broke out, Israel redeployed hundreds of paramilitary Border Police — normally used to quell violent demonstrations in the West Bank — into its own cities.

Some of Israel’s traditional allies are taking notice, with left-leaning Americans increasingly drawing parallels to racial injustice in the United States.

“For years, most of the world, including liberals and progressives, believed that there was a good democratic Israel that was separate from a bad, Israeli-run apartheid regime in the occupied territories,” says Nathan Thrall, a writer living in Jerusalem who authored a book about the conflict. “That argument is collapsing before our eyes.”

That leaves Gaza, from which Israel withdrew all its troops and settlers in 2005, and where Hamas seized power from the Palestinian Authority two years later. Israel and Hamas have fought four wars in a little over a decade, and Israelis routinely speak of the territory as though it is a hostile neighboring country.

But more than half of the 2 million Palestinians living in Gaza are the descendants of refugees who fled or were driven from their homes in what is now Israel in 1948. Israel controls Gaza’s airspace, coastal waters, population registry and commercial crossings.

All of this together, according the Israeli human rights group B’Tselem and the New York-based Human Rights Watch, amounts to a single apartheid regime in which the roughly 7 million Jews living between the river and the sea dominate the roughly 7 million Palestinians — just in different ways depending on where they live.

Israel adamantly rejects the apartheid label and bristles at talk of a single state, which it views as an assault on its very legitimacy, even though its political system is dominated by leaders opposed to Palestinian independence.

Tareq Baconi, an analyst with the Crisis Group, an international think tank, says the question of whether there should be one or two states has been rendered largely irrelevant.

“Partition was something Palestinians and Israelis tried to do, backed by the international community, and it failed,” Baconi said.

“There might be some form of partition in the future. Who knows? Right now… the issue is that the single state that controls these territories is constitutionally committed only to Jews, not to Palestinians,” he said.

Palestinians run from sound grenades thrown by Israeli police in front of the Dome of the Rock in the al-Aqsa mosque complex in Jerusalem, Friday, May 21, 202, as a cease-fire took effect between Hamas and Israel after a 11-day war. (AP Photo/Mahmoud Illean)