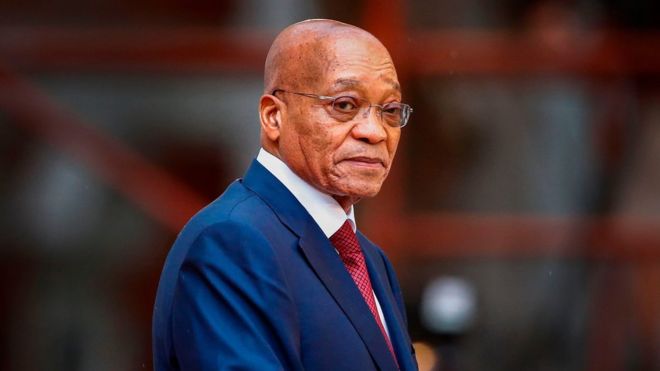 But despite the ANC’s top leadership deciding to “recall” him “urgently”, the scandal-hit Mr Zuma was still in power on Tuesday.

He is expected to respond to the request on Wednesday, an official said.

He had already told them he was willing to stand down in the next three to six months, the official added.

Mr Zuma, who has been in power since 2009, has been dogged by corruption allegations.

But he has so far resisted increasing pressure to quit since December, when Cyril Ramaphosa replaced him as leader of the ANC.

“The NEC has noted South Africa is going through a period of uncertainty and anxiety as a result of unresolved matter of transition,” he said.

Mr Magashule said the country needed to build on the “renewed hope” felt after the election of Mr Ramaphosa as ANC leader.

“It is obvious we want Comrade Ramaphosa to come in as the president of South Africa,” he added.

He said the president was expected to respond to the NEC’s decision on Wednesday, although they had given him no deadline.

“The only way to remove Jacob Zuma as president of our country is for parliament to do so through a motion of no confidence,” the Democratic Alliance (DA) tweeted.

It called the motion brought by fellow opposition group, the Economic Freedom Fighters (EFF), to be brought forward from 22 February so parliament can “remove Jacob Zuma”.

What has Mr Zuma done wrong?

Mr Zuma’s presidency has been overshadowed by allegations of corruption which he has always vehemently denied.

In 2016, South Africa’s highest court ruled that Mr Zuma had violated the constitution when he failed to repay government money spent on his private home.

Last year the Supreme Court of Appeal ruled that he must face 18 counts of corruption, fraud, racketeering and money-laundering relating to a 1999 arms deal.

More recently, Mr Zuma’s links to the wealthy India-born Gupta family, who are alleged to have influenced the government, have caused his popularity to plummet.

Both Mr Zuma and the Guptas deny the allegations.

How likely is Mr Zuma to quit?

The formal request to resign is difficult to resist, but he is not legally obliged to do so and could technically carry on as president despite losing the support of his party.

Basseterre gets its traffic lights