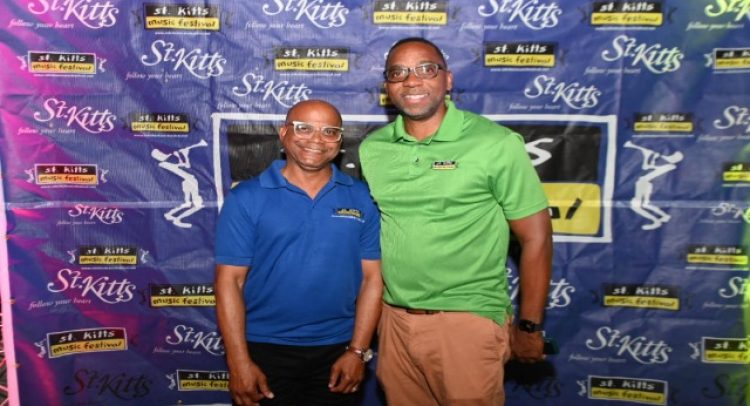 After a two-year hiatus, the Caribbean’s premier entertainment event is back!

The St. Kitts Music Festival was re-launched on Friday night, 25th March, amidst a spectacle of fireworks, live entertainment, and special ticket giveaways.

The reveal of the nightly schedule of performers was hosted during a special Release Party, hosted at the Splash Bar & Restaurant, located at the Royal St. Kitts Hotel in the picturesque tourist district of Frigate Bay.

Early reactions to the Roster indicate that once again the organizers have gotten it right and have delivered another fantastic lineup of world-class entertainers.

“This year, we promise you 3 energetic nights of world-class entertainment that will leave you with an Unforgettable Experience,” said Damion Hobson, Chairman of the 26-year-old festival.

Mr. Hobson said that his Committee has worked tirelessly to fashion a lineup that is consistent with the high standards exhibited since 1996.

Minister of Tourism, Hon. Lindsay Grant, who has responsibility for the festival, said, “As we revitalize and reenergize the tourism sector, the 2022 edition of the St. Kitts Music Festival has potential to boost employment and visitor numbers and to catalyse increased levels of economic activity, revenue generation and circulation, over the short to medium term, while we continue on the path of recovery in the tourism and other sectors.”

Grant also issued a call to local entrepreneurs,”I therefore want to make a special appeal to all stakeholders – MSME’s and the larger corporate community alike, All businesses who wish to contribute directly and indirectly to and reap the socio-

economic benefits of Music Festival 2022 –  the time to start to build that momentum is NOW, so we can repeat the successes of 2018 and 2019 and again make this festival an event to remember, both for its entertainment value and the economic returns we know it can deliver.”

The festival’s addition to the St. Kitts -Nevis economy in terms of GDP was EC$5 million, in 2018. Findings also revealed that the total number of jobs attributable to the St. Kitts Music Festival was almost 2,260. This included part-time jobs, jobs that lasted one day and jobs that were generated outside of the festival grounds.

These records were however shattered in 2019 with record numbers of concert attendees.

The festival over the past two decades has gained an enviable reputation for its high-quality performers in R&B, Jazz, Hip Hop, Soca, Reggae, Dance hall, and other modern genres.

“I am very confident that the Roster of Artistes unveiled tonight, will not only excite you but also brighten your spirits after two long years of entertainment drought, promised Mr. Hobson.

He said that “While we have again packaged a list of some of the best entertainers in the world, appearing on each night of the festival, our Committee and the Ministry of Tourism have decided NOT to increase the nightly ticket price. Therefore, all nightly tickets will remain at only US$50 or EC$135.00.”

With no current Coronavirus cases in the country, the festival will be open to all fans and there are no restrictions based on the vaccination status of individuals. “In other words, you DO NOT have to be vaccinated to attend the festival. However, as of now, visitors entering the country are still required to be fully vaccinated,” explained the chairman.

COVID-19 prevented the hosting of the festival in 2020, one month after the Roster was  launched, and again in 2021, it had to be canceled.

The three nights of concerts will be held at the Kim Collins Athletic Stadium in Bird Rock.

Here is the full nightly lineup: